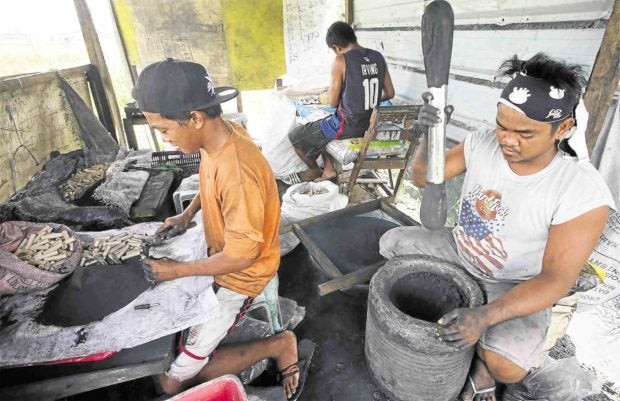 CITY OF MALOLOS — Bulacan lawmakers said they would fight any measure that would ban firecracker manufacturing and sale in the country, arguing that it would destroy a whole industry.

Informed that President Rodrigo Duterte planned to ask Congress to pass a bill imposing a total ban on pyrotechnic devices, Cibac Rep. Sherwin Tugna said he would “do his best to present the side of the industry, [explain] why we are supporting the strict regulation but not total ban [of fireworks and firecrackers]. We will fight on behalf of families whose jobs have been legalized and regulated,” said Tugna, husband of Bocaue Mayor Joni Villanueva-Tugna.

Mayor Tugna began consulting fireworks manufacturers to determine how the industry would respond to Mr. Duterte’s proposal and how local communities could absorb the people who would be displaced by the ban.

“Here in Bocaue, there were no recorded firecracker accidents when people welcomed the New Year,” she said, to prove that local firecrackers and fireworks can be safe.

In 2016, she ordered the closure of fireworks stores in the town after an explosion struck a row of firecracker stalls and killed three people. Only traders who complied with safety requirements were allowed to operate, she said.

Sen. Joel Villanueva, also from Bocaue, said the administration’s proposal would “eliminate an industry and cause many people to lose jobs when what we need to do as a government is create more jobs.”

“Fireworks are part of our culture, history and tradition—not just in Bulacan but in the whole country … There is really a need for stronger regulation of the fireworks sector. But it doesn’t mean we need to eliminate the industry,” he said.

“I intend to pursue ways of making the industry and its products safe. I also support President Duterte’s wish that no more Filipinos should fall victims to the misuse of firecrackers, but I hope he leaves out fireworks from this ban,” he said. —Carmela Reyes-Estrope