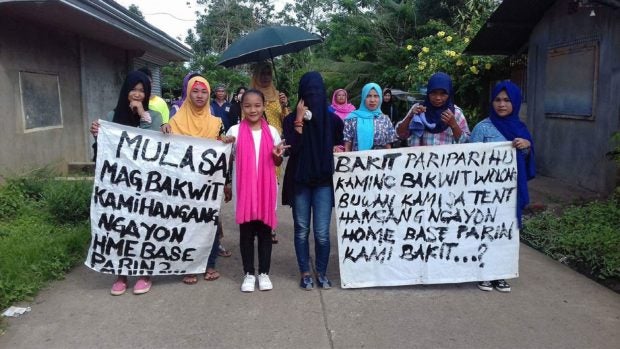 Home-based evacuees in Baloi, Lanao del Norte stage a protest march on Tuesday to press the government to provide them regular rations.CONTRIBUTED PHOTOS

On Tuesday, 43 heads of families representing “home-based” evacuees joined a 3-kilometer march from Purok Kadingilan in Barangay Pacalundo to the town hall to air their concerns.

But a government official said the Department of Social Welfare and Development (DSWD) had already agreed to provide them with regular food rations.

According to the DSWD, home-based evacuees are those who fled from Marawi but are staying outside official evacuation centers, including those in relatives’ houses.

The protesters said they spent months in tents at an evacuation center in Barangay West, but they left due to congestion. They said they also needed more privacy.

Thousands of Marawi residents fled after members of the Maute and Abu Sayyaf groups laid siege to the city on May 23 last year.

While the military declared the end of the war in October, many residents have yet to return to the city. Others have been given temporary housing by the government in the outskirts of Marawi.

Acmilah Taguranao, 39, whose husband was a fire volunteer before the siege, said she joined the protest because she could no longer bear the bias of DSWD workers.

“They should distribute relief goods equally. Why is it that those in evacuation centers regularly get rations while we don’t? We also need food,” Taguranao said.

In the early days of the siege, other home-based evacuees also made similar complaints but government officials said they could only provide for those at evacuation centers recognized by the government.

Among those who earlier complained of lack of attention were Marawi evacuees who sought refuge at the Islamic Center in Ceanuri Village, Iligan City. 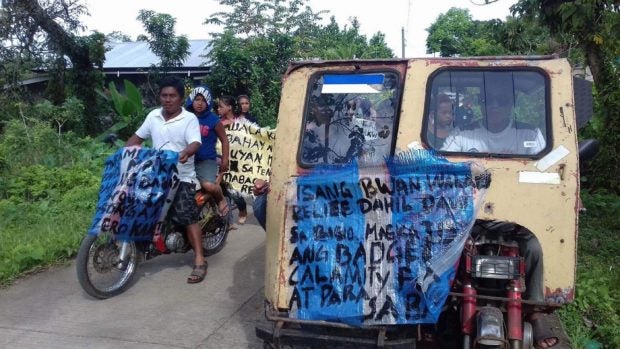 Zorayda Acmad, 21, who is pregnant with her sixth child, said she joined the protest even with her condition because she could not bear the problem anymore.

“It is more difficult to run out of food,” Acmad said.

She said on Jan. 8, they received a box of relief goods but the ration came more than a month after they got their last supply on Dec. 3.

Each box could sustain her family’s needs for only three days, Acmad said.

Acmad said they would rely on the goodwill of the village chief of Pacalundo when food supply from the government was lacking.

Housing Assistant Secretary Felix Castro, field office manager of Task Force Bangon Marawi, said the DSWD did not recognize the shelters in Kadingilan as an official evacuation center because families staying there “were originally home-based from different areas.”

Despite this, Castro said the DSWD in Northern Mindanao had already agreed to provide them with regular rations.

More than 384,000 people displaced by the Marawi war remained in various areas in the provinces of Lanao del Sur and Lanao del Norte as of Wednesday.

According to Castro, most of them are staying at 67 evacuation centers. —Divina Suson