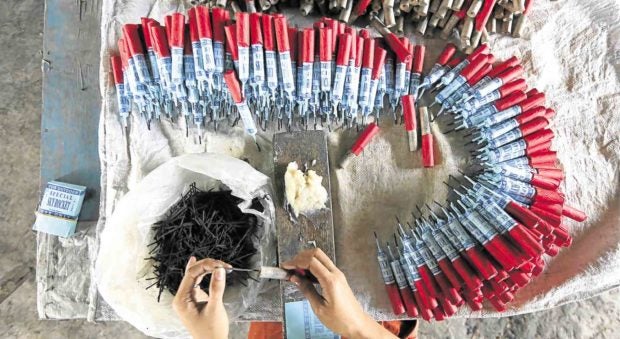 Senator Sherwin Gatchalian is calling on his colleagues at the Senate to speed up the process in approving his bill banning firecrackers and fireworks in the country, especially now that President Rodrigo Duterte is seeking a law on the total prohibition of the production and use of pyrotechnics. INQUIRER FILE / NIÑO JESUS ORBETA

Senator Sherwin Gatchalian on Wednesday expressed support for President Rodrigo Duterte’s call for Congress to enact a law that would ban firecrackers and other pyrotechnic products nationwide.

“Delighted” by the President’s desire to act on the matter, Gatchalian urged his colleagues to expedite the consideration of the Firecracker Prohibition Act of 2016 or Senate Bill No. 1140, which he authored.

“Now that the President has expressed his desire to act on the matter, I hope my peers in the Senate will expedite the consideration of the bill,” the senator said in a statement.

“The irresponsible use of these dangerous explosives by recreational users continues to endanger public health and safety, and it also has a negative impact on the environment,” he added.

The bill has been pending at the committee on public order and dangerous drugs
and local government since September 14, 2016.

On Tuesday, Presidential Spokesperson Harry Roque said the President wanted a law on the total ban of firecrackers and pyrotechnic products nationwide.

This is seven months after he signed in June 2017 executive order no. 28, regulating the use of firecrackers and other pyrotechnic devices in the country.

“He wants Congress to enact this law at the soonest time possible so that the public debate on the banning of fireworks and pyrotechnics could begin as early as possible,” Roque earlier said. /cbb