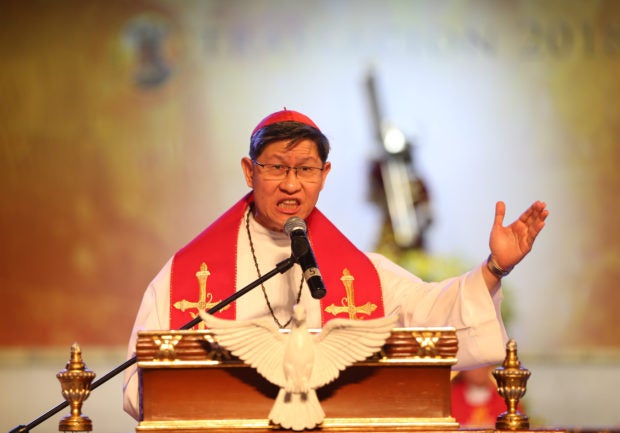 The archbishop of Manila, Cardinal Luis Antonio Tagle, on Tuesday urged hundreds of thousands of devotees of the Black Nazarene to turn away from greed for power and false paths and instead be the path for others to reach Jesus Christ.

“Our lives do not depend on power. We were born without power. And in the hour of our death, we are powerless. Live a life without greed for power and you will be a true human being,” Tagle said in his homily during Mass at Quirino Grandstand in Manila’s Rizal Park.

Fr. Hernando Coronel, parish priest of Quiapo Church, celebrated the Mass that began at midnight on Monday to usher in the Feast of the Black Nazarene.

The Mass was one of the highlights of activities leading up to the procession that would carry the image of the Black Nazarene from Quirino Grandstand to its shrine at Quiapo Church.

According to Tagle, a true human being is brave enough to admit that he is a creation of God and accepts this with all humility.

“A true human admits that he is a creation of God and hence will not compete with God. Being a true human, in the ways of Jesus, means that we should not play God, but instead accept our lowliness,” he said.

Tagle warned devotees against falling prey to a false truth and false life, by choosing material things over God.

“In our search to pass off as human, we fall prey to false things. Some believe that if you have a lot of money, you will look human. If you live by things that are false, you will resemble it,” he said.

Instead, he said, Catholics should be inspired to live a truthful life through the example of Jesus Christ.

“You cannot be a real human if you are not humane toward others. Jesus showed us how it is to be a real human—he embraces the hungry, thirsty, naked, homeless and abused, and tells them that he is one with them,” he said.

“Let us not lose hope because there is someone who is with us [on] our journey. He is Jesus, who is with us in our traslacion in life,” he said, using the Spanish term for the Black Nazarene’s return to its shrine.