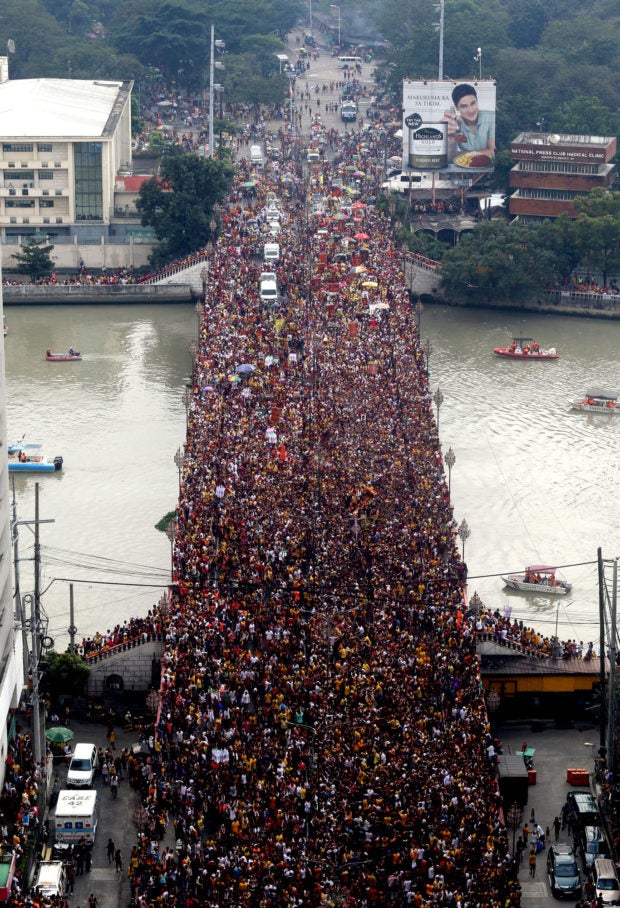 BRIDGE OF FAITH Thousands of devotees jam Jones Bridge as the procession of the image of the Black Nazarene heads toward Quiapo Church in Manila. —RICHARD A. REYES

Hundreds of thousands of barefoot, towel-waving devotees swarmed around the image of the Black Nazarene as they followed the centuries-old icon in a procession through Manila’s old quarter on Tuesday during one of the Philippines’ largest religious festivals.

In a frenzied display of religious fervor, men, women and children climbed over heads and shoulders to get near the carriage bearing the icon of the Black Nazarene, which they believe performs miracles.

The faithful first gathered at Rizal Park on Monday night, heard Mass at Quirino Grandstand that began at midnight, then began the Traslacion — the procession that would carry the icon back to its shrine at Quiapo Church in the heart of Old Manila — as dawn broke on Tuesday.

The transfer of the image from Quirino Grandstand to the carriage used to be a chaotic event, but on Tuesday it went smoothly and took only five minutes, according to Fr. Douglas Badong, parochial vicar of Quiapo Church.

Good work by the marshals

“I almost cried because for the first time, it was very orderly. The Hijos del Nazareno coordinated well and this was the result,” Badong told reporters.

The Hijos del Nazareno (Children of the Nazarene) are the marshals who protect the icon of Jesus and pull the carriage during the procession.

The transfer began at 4:55 a.m., with the devotees kneeling on the ground while singing the Lord’s Prayer.

At 5 a.m., the procession from the park, which would take all day and all night, began.

Last year, it took 22 hours to bring the image back to Quiapo Church, repeating the record set in 2012.

The transfer of the image from the grandstand to the carriage was delayed last year because overzealous devotees rushed the icon, nearly toppling it.

On Tuesday, however, the devotees were calmer, according to Badong, and they cooperated when the marshals asked them to kneel on the ground as the image was transferred to the carriage.

“That was our objective this year, to have the image on the parade grounds faster,” Badong said.

The procession went faster, too, as security forces were deployed along the route to keep order.

The carriage bearing the image reached Jones Bridge and crossed Pasig River at about noon, another record. In previous years, the procession crossed the river in late afternoon.

Badong said organizers would try to do better next year.

Processions and other religious rites were also held elsewhere in the country to celebrate the Feast of the Black Nazarene.

The Philippines is Asia’s Catholic bastion with a flock of more than 80 million. Spain colonized the archipelago in the 16th century and spread the faith. 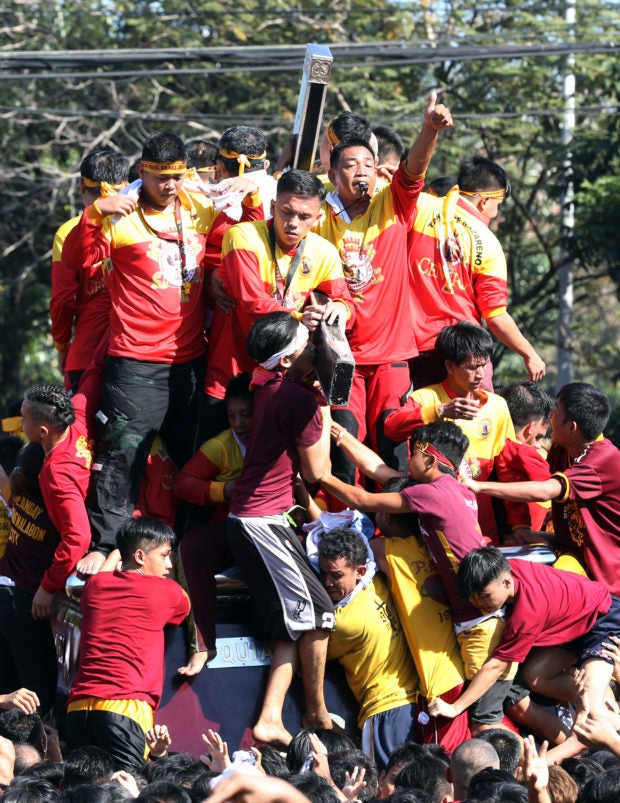 RELIGIOUS FERVOR A devotee kisses the cross of the Black Nazarene as hundreds of thousands swarm around the carriage bearing the centuries-old icon. —NIÑO JESUS ORBETA

The wooden Black Nazarene was brought to Manila by missionaries in 1606. It is believed to have survived calamities.

Citing police estimates, radio and television reports said this year’s Black Nazarene festivities might draw 17 million devotees nationwide, some seeking healing for illnesses and forgiveness of sins and others expressing gratitude for blessings.

Around 380,000 people were in the Manila procession, according to an early-afternoon estimate by police, excluding those waiting elsewhere along the procession’s route.

Men surrounded the carriage that was pulled by ropes, while the crowd waved towels and handkerchiefs in a sign of praise to the life-sized image of Jesus of Nazareth kneeling on one knee and carrying a cross.

The devotees wore maroon shirts, similar to the color of the Black Nazarene’s robe, and had their towels wiped on the icon and thrown back to them.

They then wiped the towels on themselves, believing the icon’s healing power would rub off on them.

“It is really tough climbing to get to the Nazarene. I get squished, and people step on my face. But I have a devotion,” Honey Pescante, a 24-year-old housewife from Bataan province, told Agence France-Presse (AFP).

More than 700 devotees were injured in Tuesday’s procession, one of them with a suspected cracked spine sustained in a fall while attempting to climb onto the carriage, said the Philippine Red Cross.

No deaths were reported. In 2016, two devotees were killed. —With reports from the wires