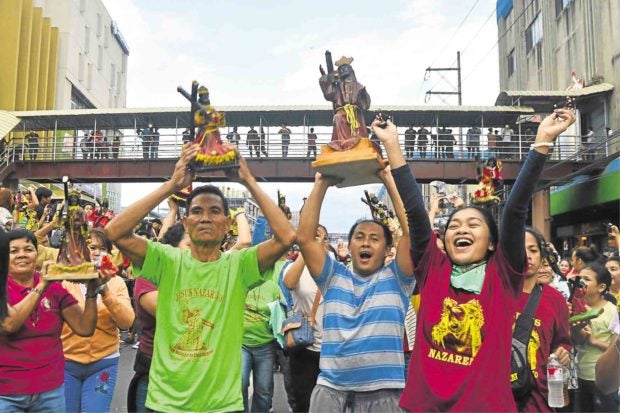 CAGAYAN DE ORO CITY—An estimated 200,000 devotees joined the city’s version of the “Traslacion,” or procession, of the Black Nazarene amid what police said was the continuing threat of a terrorist attack.

The Traslacion, which started from the St. Augustine Metropolitan Cathedral on Fernandez Street and ended at the Black Nazarene Shrine, lasted for about two hours.

He said more than 1,000 police officers and soldiers were deployed to secure the areas where the official replica of the Black Nazarene statue passed.

Hortillosa said security was tighter this year because of continuing terror threats.

Policemen called the attention of devotees who wore ball caps, jackets and those carrying backpacks and large bags around the St. Augustine Cathedral and on Velez Street, where the statue passed.

Dozens of police officers also acted as a human cordon to the Black Nazarene statue during the traslacion.

The presence of law enforcers during the procession, Hortillosa said, helped keep order as people complied with safety rules.

The deployment of policemen as human cordon around the statue was the result of chaos during previous traslacion in Manila when devotees tried to climb the carriage of the Nazarene escorted only by members of the Hijos de Nazareno, a group of male volunteers tasked with ensuring order during the Black Nazarene procession. 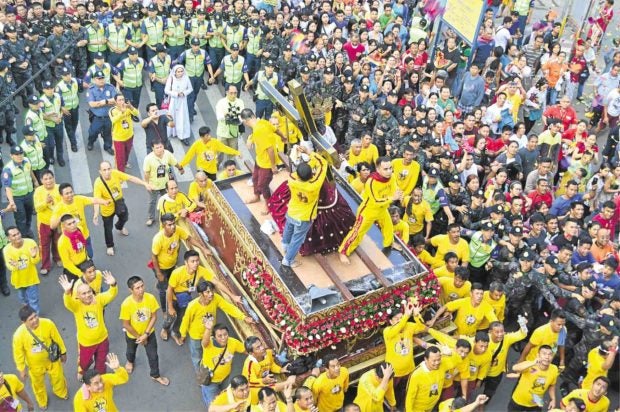 The procession of the Black Nazarene in Cagayan de Oro drew a smaller crowd estimated at 200,000. —JIGGER JERUSALEM

“With uniformed police personnel surrounding the Black Nazarene, people who want to disrupt the traslacion like climbing on the carroza will think twice before doing it,” Hortillosa said.

He said the regional and city police offices were on level 3 alert as authorities tried to verify a report that terrorists were planning to attack the cities of Cagayan de Oro and Iligan in retaliation for their defeat in Marawi.

But, he added, the threat did not deter the Church from holding the traslacion as law enforcement agencies worked to ensure security during the Feast of the Black Nazarene.

Hortillosa said the city police has been on high alert since martial law was extended and will remain so.

The procession of the Black Nazarene in Cagayan de Oro drew a smaller crowd estimated at 200,000. —Jigger Jerusalem