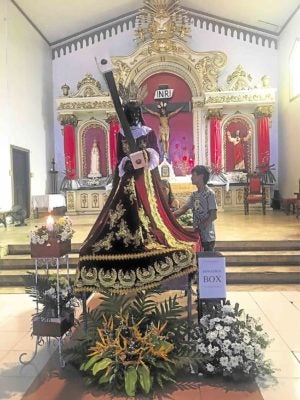 NAGA CITY — As devotees of the Black Nazarene braved the huge crowd and the dangers of the procession in Quiapo, Manila, devotion to the religious icon continued to grow in Naga City, which held its version of the “Traslacion.”

Fr. Felix Abaño, parish priest of Holy Cross Chapel in the village of Tabuco here, said Church officials were expecting hundreds of devotees to come to the chapel where the Feast of the Black Nazarene has been celebrated for 29 years already.

Benaid, 62, said her father became the founder-president of the group promoting devotion to the Black Nazarene in Naga City.

She said the Black Nazarene devotion starts every Dec. 31 when the image of the Black Nazarene, which her family owned, is transferred to the Holy Cross Chapel from their house in Barangay Lerma, also in Naga City.

She said the image of the Black Nazarene would be returned to its permanent home in the village of Palsong in Bula town on Jan. 14.

Abaño said Mass precedes a procession of the Black Nazarene image in the afternoon of Jan. 9.

The procession starts at the Naga City Metropolitan Cathedral then returns to the Holy Cross Chapel, covering 1.5 km of the city’s main thoroughfare.

He said, unlike in the procession in Quiapo, the devotees here were more disciplined.

He said there was no shoving and pushing to touch the image of the Black Nazarene.

The only problem the priest said that procession organizers encountered was the presence of thieves that took advantage of the growing number of visitors in the chapel.

With more people coming in the small parish here, Abaño said his office became a target for a thief that took off with P15,000 in cash.

Abaño said he remembered seeing the thief kneeling and praying inside the chapel as the same man caught in security camera footage stealing the money from his office.