Reach out to those who are suffering, Tagle urges Nazarene devotees | Inquirer News
Close
menu
search

Reach out to those who are suffering, Tagle urges Nazarene devotees 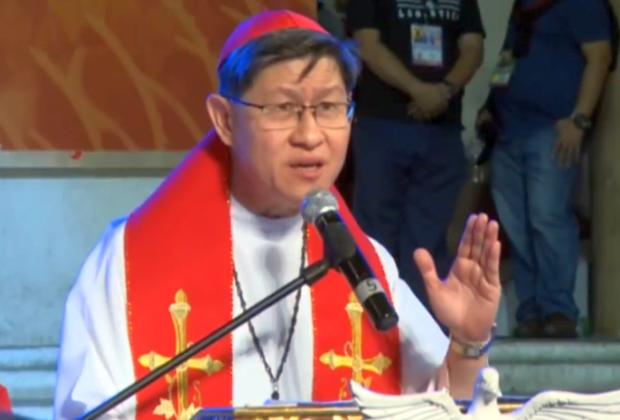 Luis Antonio Cardinal Tagle deliver his homily during the midnight Mass at the Quirino Grandstand in Manila on Tuesday, Jan. 9, 2018. (Photo from a TV Maria livestream video )

To be called a real person, you must learn how to reconnect your life to those who are suffering.

Manila Archbishop Luis Antonio Cardinal Tagle shared this message with some 120,000 devotees of the Black Nazarene during his homily at a midnight Mass celebrated on Tuesday at the Quirino Grandstand in Manila.

[A real person knows how to relate with other people. A real person embraces the hungry, the thirsty, the clothesless, the homeless, and the abused.]

Tagle delivered the 21-minute homily during the Eucharistic Mass hours before the Traslacion, with Fr. Hernando Coronel, parish priest of the Quiapo Church, celebrating the Mass.

In the midst of disasters that happened in the country in 2017, particularly those who were affected in the war in Marawi, Mindanao, Tagle reminded devotees to reconnect with each other.

His message was centered in this year’s Traslacion theme of “Poong Hesus Nazareno: Ang Daan, Ang Katotohanan at Ang Buhay,”

Tagle urged devotees to follow the path that Jesus Christ himself had set for others to follow.

He also urged them not to be disheartened in life for Jesus Christ will always be there during tough times.