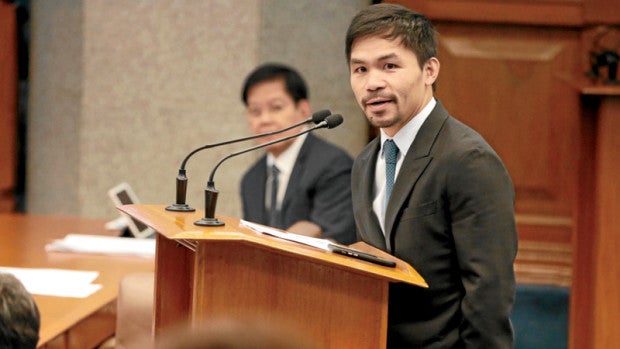 The Senate will resume this month its hearings on the revival of the death penalty through a subcommittee to be headed by Sen. Manny Pacquiao, Senate President Aquilino Pimentel III said on Monday.

Pimentel made it clear that he made the decision not because House Speaker Pantaleon Alvarez had criticized the upper chamber for not acting on the death penalty proposal.

He said he had asked Pacquiao, an advocate of the death penalty, to resume the hearings as early as October last year.

Pimentel explained that the death penalty hearings were being handled by the Senate justice committee, headed by Sen. Richard Gordon, who in turn designated Pacquiao to lead the subcommittee.

But Senate Minority Leader Franklin Drilon said the revival of the death penalty measure was not part of the common legislative agenda.

“I am not aware of any change in the priority list that we have agreed with the House,” Drilon said. —Christine O. Avendaño