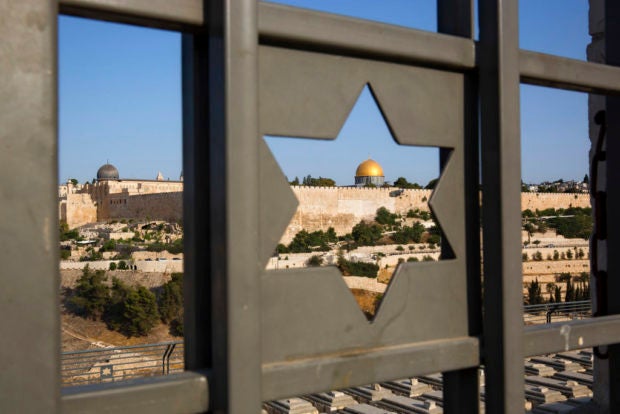 In this July 25, 2017 file photo, Jerusalem’s Old City is seen trough a door with the shape of star of David. AP FILE

AMMAN, Jordan — Jordan said on Saturday the Arab League would seek international recognition of the Palestinian state with east Jerusalem as its capital after Washington recognized the Holy City as Israel’s capital.

Foreign Minister Ayman Safadi made the announcement at a joint news conference with Arab League chief Ahmed Abul Gheit after talks in Amman on the status of Jerusalem.

The talks were attended by the foreign ministers of Egypt, Saudi Arabia, Morocco and the Palestinian Authority as well as by the United Arab Emirates minister of state for foreign affairs.

Abul Gheit said an expanded meeting of Arab foreign ministers to discuss Jerusalem would be held at the end of the month.

US President Donald Trump’s controversial decision in December to recognize Jerusalem as Israel’s capital sparked protests in Arab and Muslim countries and was rejected in a non-binding UN General Assembly resolution.

Jerusalem’s status is among the most contentious issues in the Israeli-Palestinian conflict.

Israel claims all of Jerusalem as its united capital, while the Palestinians see the eastern sector as the capital of their future state.

“According to international law, Jerusalem is an occupied land,” he said.

Earlier Saturday, Jordan’s King Abdullah II met the Arab diplomats and said “the question of Jerusalem must be resolved within the framework of a just and lasting peace agreement between Palestinians and Israelis”.

Jordan signed a peace treaty with Israel in 1994, and is the custodian of Muslim holy sites in Jerusalem.

The kingdom has been rocked by anti-US and anti-Israeli protests in the wake of Trump’s decision, and has accused the US president of violating international law. /cbb