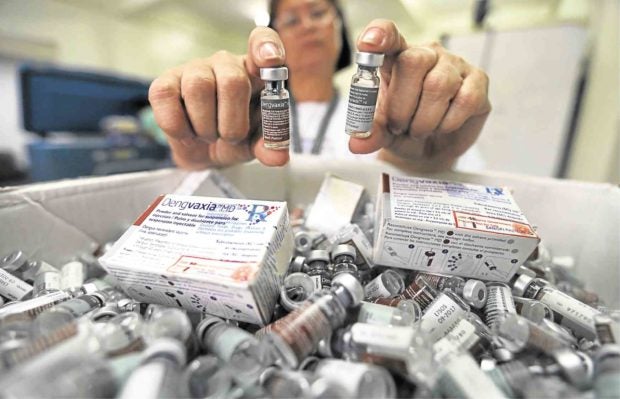 Dengvaxia’s manufacturer Sanofi Pasteur has been fined P100,000 for not meeting marketing requirements for the vaccine. — EDWIN BACASMAS

A panel of experts from the Philippine General Hospital (PGH) will review the circumstances behind the deaths of 14 children who were given the Dengvaxia antidengue vaccine under the government’s immunization program, Health Undersecretary Enrique Domingo said on Friday.

“Reports of death or disease in these children will be referred to the PGH for review to see if there was any relationship between the fatality and the vaccine,” Domingo said.

The children were aged 9 to 11 and came from Central Luzon, Southern Luzon and Metro Manila, the health official said on the sidelines of a forum where Domingo and Health Secretary Francisco Duque III gave updates on the Dengvaxia vaccine controversy.

Less than two years after the Department of Health (DOH) launched its dengue immunization program using Dengvaxia, pharmaceutical firm Sanofi-Pasteur released an advisory saying its vaccine could cause severe dengue symptoms among those who had no previous exposure to the virus.

The Food and Drug Administration ordered a pullout of the vaccine and suspended its certificate of product registration for a year.  It also fined Sanofi Pasteur P100,000 for failing to comply with postmarketing authorization requirements for the vaccine.

Duque had earlier said that the health department was monitoring the more than 837,000 children given the vaccine under the DOH immunization program starting March 2016.

So far, the case records of 14 children who died after being administered the vaccine had been forwarded for review by a team of experts from the PGH headed by Dr. Juliet Aguilar, the chief of its department of pediatrics.

Dengue was listed as the cause of death of four of the children, while the other children had heart ailments, leukemia and lupus written on their death certificates.

Domingo noted that some of the children fell ill two weeks to one month after vaccination, while the others became sick six months after.  The children also had different symptoms and diagnosis when admitted to hospital for treatment, he added.

It took some time to create a panel whose members would have no conflict of interest in the issue, Domingo said, adding that the expenses for the morbidity and mortality review would be shouldered by the DOH and PGH alone.

“(The experts) are expected to come up with a very objective appreciation of these cases. Maybe in one or two weeks they can give us the results, (but) I cannot say exactly when,” he added.