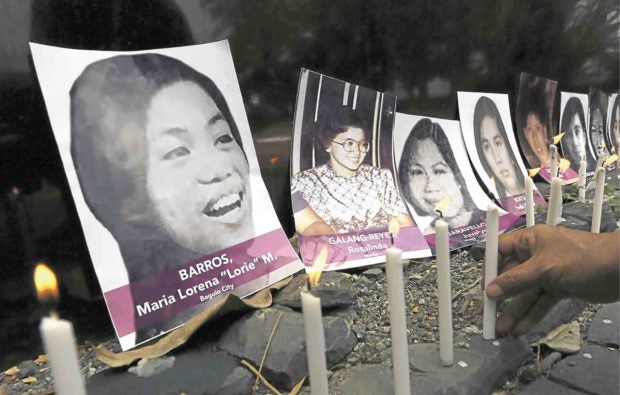 Groups demanding compensation for martial law victims, like these activists memorialized at Bantayog ng mga Bayani in Quezon City in this 2016 file photo, have suffered another legal setback.

The Court of Appeals (CA) has affirmed its earlier decision to dismiss a petition by victims of human rights violations under the late dictator Ferdinand Marcos to enforce a Hawaii court ruling that awarded them $2 billion in compensation from the strongman’s estate.

In a three-page resolution dated Jan. 3, the court’s former 12th Division stood by its July 2017 decision to uphold the ruling of the Makati Regional Trial Court (RTC) that the claims on the Marcos estate could not prosper due to a lack of jurisdiction and a violation of due process.

“Consequently, the final judgment rendered therein [by the Hawaii court] is not binding,” said the CA’s resolution, written by Justice Normandie Pizzaro.

The martial law victims said they would appeal the CA’s decision in the Supreme Court.

The case originated from a class suit filed in April 1986 by more than 9,500 Filipinos who claimed damages for human rights violations under Marcos in the US District Court in Hawaii.

On Sept. 24, 1992, after a three-week trial on liability, the court found the Marcos estate liable for torture, death and disappearances. The jury awarded the plaintiffs about $1.97 billion in total damages.

On Feb. 3, 1995, the federal district court entered final judgment in the class action, which was affirmed by the US Ninth Circuit Court of Appeals in December 1996.

The compensation was to be paid by the Marcos estate, a juridical entity that arose after the execution of the late dictator’s last will and testament following his death in 1989 in Hawaii, where he had fled with his family after his ouster in the 1986 Edsa People Power Revolution.

The claimants sought recognition and enforcement of the Hawaii ruling from the Makati RTC, but the Marcos estate protested.

The appeals tribunal affirmed the lower court’s view that the Hawaii ruling was null and void for failing to meet the standards of what a valid judgment is in the Philippines.

The court said that applying Philippine judicial processes, the Hawaii court would have no jurisdiction on the matter because the complaint was erroneously filed as a class suit and the bulk of claimants remained unidentified.

“In merely using a scheme of statistical sampling to determine a compensation schedule and to compute an aggregate judgment for compensatory damages, the Hawaii court gave no opportunity to the unnamed claimants the full rehabilitative potential litigation and overlooks the individual harms purportedly suffered, as well as giving no opportunity for the Marcos estate to confront each and every claimant. Consequently, the final judgment rendered therein is not binding as to the right to due process of both parties was violated,” the appeals court said in its Jan. 3 ruling.

No to foreign impositions

“Further, the final judgment was constitutionally infirm because, although the complaint in MDL 840 was filed under the Alien Torts Statute, also called the Alien Torts Claims Act, the same was disposed of on the basis of a different law (presumably the Torture Victim Protection Act). This invalidates the disposition considering that a decision that does not conform to the form and substance required by the Constitution and the law is void and deemed legally nonexistent,” it added.

The court said in its July 2017 decision that the “rules of comity should not be made to prevail over our Constitution and we cannot allow foreign impositions to trample upon our sovereignty.”

Despite the nonrecognition of the Hawaii court’s ruling, lawyers for the martial law victims over the years provided compensation for the plaintiffs from the alleged ill-gotten and hidden wealth of the Marcos family that had been recovered.

Rosales was disappointed that the appellate court twice refused to recognize the historic Hawaii court decision, but assured that the martial law victims would not back down and would ask the Supreme Court to overturn the CA ruling.

“There is no basis not to grant the enforcement. This is a legitimate, historical decision by the United States court—the first time that Marcos was deemed guilty of human rights violations,” Rosales told the Inquirer on Friday.

She pointed out that the Hawaii class suit had been legitimized and cited in court decisions internationally and in the Philippines, especially in the July 15, 2003 Supreme Court decision which said the Marcoses’ accumulated ill-gotten wealth and ordered the forfeiture of  $658 million of their Swiss deposits in favor of the Philippine government.

The seized deposits have become the source of funding for the compensation of martial law victims under the Human Rights Victims Claims Board (HRVCB).

The claims board has received more than 75,000 claims and processed nearly 60,000. It is expected to announce the final number of legitimate claims, estimated to be more than the 9,539 Hawaii plaintiffs, before its term ends in May.

Under the law creating the HRVCB, petitioners in the Hawaii class suit enjoy “conclusive presumption” as acknowledged claimants, Rosales said.

“Who is the Court of Appeals acting for? Is this because human rights victims are ordinary people and are not in power? Is it because the other party (Marcos family) want to be Vice President or President of the Philippines? Is this an issue of justice or power?” Rosales said.

Lamangan, who was a torture victim, told the Inquirer that the victims had the right to receive the Hawaii court’s damage award.

“These are the people who were killed, imprisoned, maimed, tortured during that regime,” he said. “Some of those who disappeared were never found at all. Some of the victims are getting old, some of them have already died … and it is only right for them to be given the $2B now.” —WITH REPORTS FROM JAYMEE T. GAMIL, BAYANI SAN DIEGO AND INQUIRER RESEARCH