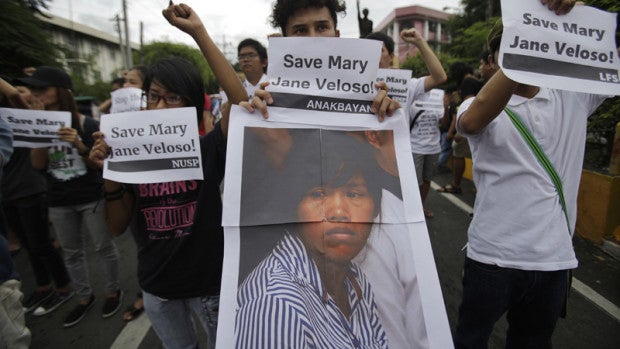 Student protesters hold a picture of Mary Jane Veloso, a Filipino convicted drug trafficker in Indonesia, as they urge Philippine President Rodrigo Duterte to save her from execution during a rally near Malacañang in Manila, Philippines on Tuesday, September 13, 2016. (AP FILE PHOTO)

The Court of Appeals (CA) has overturned a local court’s order allowing Mary Jane Veloso – the Filipino detained in Indonesia’s death row due to drug trafficking – to testify against her alleged recruiters through a deposition.

Sergio and Lacanilao were facing human trafficking charges for allegedly duping Veloso to smuggle illegal drugs in Indonesia in 2010. They were under police custody.

However, Veloso’s alleged recruiters argued that her deposition would violate their right to directly confront the witnesses against them as guaranteed under Section 14, paragraph 1 of the 1987 Constitution.

The CA agreed with the petitioners that Veloso should be present before a trial if she were to testify.

“Generally, the examination of witnesses must be done orally before a judge in open court,” the appellate court said in the 18-page decision dated December 13, 2017.

“This is true especially in criminal cases where the Constitution secures to the accused his right to a public trial and to meet the witnesses against him face to face,” the court said.

Last April 29, 2015, the Indonesian government postponed Veloso’s execution on the ground that her testimony was needed to prosecute and convict her alleged recruiters.

However, the Indonesian government imposed the following conditions to halt the execution: Veloso should remain in detention, no cameras would be used in taking the testimony, none of her lawyers would be present when she testifies, and that the questions must be in writing.

With the Nueva Ecija RTC’s order overturned, Veloso would not be able to testify against Sergio and Lacanilao.                 /kga