Over 1K signatures to back Mindanao martial law submitted to OSG 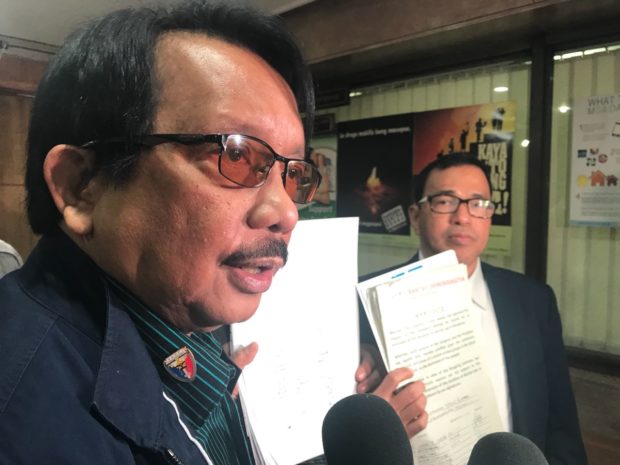 VACC founding chair Dante Jimenez (left), together with lawyer Manuelito Luna (right), submits a report before the Office of the Solicitor General containing a manifesto with more than a thousand signature backing extension of martial law in Mindanao. INQUIRER.net / JHOANNA BALLARAN

Three Mindanao leaders filed before the Office of the Solicitor General (OSG) on Thursday a manifesto, containing more than a thousand signatures of residents supporting the extension of martial law in Mindanao.

Mark Siacon and Joenime Kapina, former provincial board members of Sultan Kudarat; and Michael Abas Kida, president of Aksyon Mamamayan (AKMA) Bantay Demokrasya submitted a report, including the manifesto which had 1,200 signatures, to the OSG to back the martial law extension, which legality is being questioned before the Supreme Court (SC).

The signatures in the manifesto were said to be affixed by residents of Sultan Kudarat, Maguindanao, and Davao City.

Siacon, Kapina and Abas were assisted by the Volunteers against Crime and Corruption (VACC).

VACC founding chairman and president Dante Jimenez said residents in the provinces have initiated the signature campaign to support the martial law extension.

“I hope these will substantiate itong kine-claim ng mga grupo na there should be an extension of martial law in Mindanao,” Jimenez told reporters.

“Let’s hope the Supreme Court will really be considerate in regards with this argument,” he added.

Siacon, a resident of the town of Palimbang, said criminal and terror activities were suppressed when martial law was declared on May 30, 2017 at the height of the Marawi City siege.

(The martial law declaration has helped a lot because it has prevented criminal activities, loose firearms, and terrorism.)

Maulana has gone into hiding since the Branch 19 of the Sultan Kudarat Regional Trial Court issued a warrant of arrest against him for illegal possession of explosives.

Siacon also said Palimbang was a hotbed of extremist fighters that fought in Marawi City.

In 2015, authorities killed eight gunmen carrying Islamic State (IS) flags during an encounter in Palimbang.

The men were reportedly led by the late Mohammad Jaafar Maguid alias Tokboy, leader of the pro-IS group Ansar Khilafa Philippines (AKP). Maguid, who was killed in 2017 in a military operation, was tagged by authorities as the brains behind the Davao City night market blast in 2016.

His wife, Karen Aizha Hamidon, was arrested by the National Bureau of Investigation (NBI) for allegedly using social media to promote extremist propaganda and recruit IS fighters.

Last December 31, two roadside blasts happened in Tacurong City, Sultan Kudarat and Shariff Aguak, Maguindanao in which three people were killed, including a police officer, while several were injured.

READ: Cop, 2 others killed in bomb blasts in Mindanao