Old tax rates will still apply for personal income in 2017 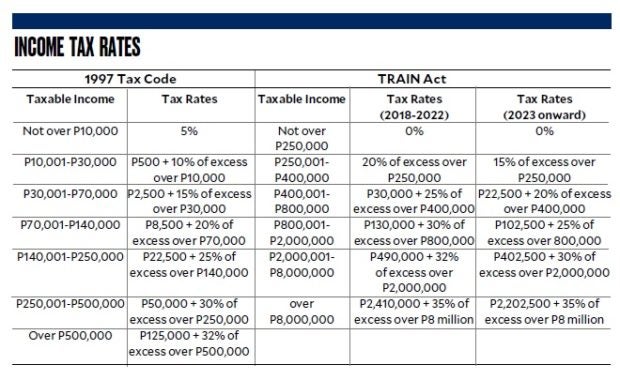 Individual taxpayers were reminded on Tuesday that personal income earned in 2017 was not covered by the new exemptions under the Tax Reform for Acceleration and Inclusion (TRAIN) Act.

“The salary and earnings of us taxpayers in the previous year will still be taxed according to the old rates when we file our income tax returns (ITR) before the April 16 deadline,” Leyte Rep. Henry Ong said in a statement.

“That is why we still need a withholding tax certificate for our 2017 ITR,” said Ong, a member of the economic affairs committee of the House of Representatives.

The law lowers the personal income tax of salary earners but raises the excise tax on a host of goods and services, including fuel, cars, tobacco, coal, oil products and cosmetic procedures.

Those earning an annual income of P250,000 would be exempt from paying income tax under the TRAIN Act, while those with higher earnings would be taxed at staggered rates. (See table comparing old and new income tax rates.)

Under Section 13 of the TRAIN Act, those earning income not exceeding P250,000 for the year starting 2018 would no longer need to file ITRs.

But Ong said this might pose problems for some taxpayers during the 2019 tax filing season.

“ITR is a document required for loans, business or other things requiring proof of income. That is why we hope that the Bureau of Internal Revenue can come up with a substitute for this requirement,” he said.

While the new law lowers the personal income tax of salary earners, it raises the excise tax on a number of goods and services that an opposition lawmaker says will adversely affect 15.2 million poor families.

Bayan Muna Rep. Carlos Isagani Zarate said the excise tax on oil products would cause a “severe domino effect” on the prices of other products and services.

The “price shock” will hit the poor the hardest considering that they do not have a higher take-home pay [as a result of the tax exemption from] the TRAIN Act but have to shell out more money due to it,” Zarate said in a statement.

Senators Ping Lacson and JV Ejercito wished they were wrong about the inflationary impact of the excise tax on fuel.

“I can only hope a number of us, senators were wrong about additional taxes on fuel, especially diesel because it’s passed on,” Lacson tweeted.

He was among four senators who voted against the ratification of the TRAIN Act. The other three are Senators Bam Aquino, Risa Hontiveros and Antonio Trillanes IV.

Lacson said he had “always thought [the new excise tax on fuel] is inflationary and antipoor.”

Ejercito said the excise tax on oil products would be passed on to consumers. “I hope I am wrong but my fear of having a food inflation might just happen,” he said.

Zarate, a member of the Makabayan bloc, said he and his allies would question the legality of the TRAIN Act.

“We will challenge the legality of this run-away TRAIN as it was railroaded in the House without the required quorum and distribution of approved copies to the members,” he said.

The measure was separately ratified by the Senate and the House of Representatives on Dec. 13, the last session day of Congress in 2017, so the tax bill could be signed by the President before the end of the year.

Makabayan lawmakers questioned the process in the House because there was no visible quorum on the plenary floor when the bill was approved. —Reports from DJ Yap and Christine O. Avendaño