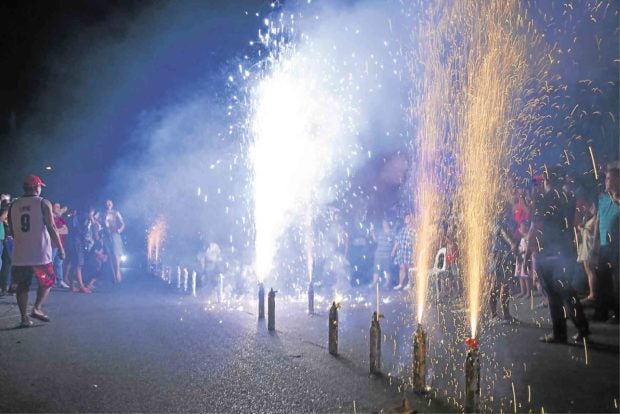 LIGHT PLAY Residents of Barangay Malued in Dagupan City light fountains along a 2.5-kilometer stretch of the village road to welcome 2018. —WILLIE LOMIBAO

Firecracker blast victims were recorded in President Duterte’s home region on Tuesday as the number of injuries rose to 347 in southern Mindanao, Central Luzon, Cordillera, Mimaropa, Bicol and Ilocos regions.

Two men were taken to the government-run Davao Regional Medical Center (DRMC) in Tagum City on Monday for injuries attributed to exploding firecrackers.

The victims, who were from the provinces of Compostela Valley and Davao Oriental, were treated for eye injuries.

In Oriental Mindoro province, a firecracker explosion triggered a fire that gutted a nipa hut inside the compound of Del Mundo Elementary School in Mansalay town on Jan. 1.

In Angeles City on the same day, three women were killed after a fire that struck a car spread to two houses in a residential subdivision in Barangay Tabun.

The three women were not able to run out of the house because a burning Toyota Vios car blocked the main entrance, said Chief Insp. Raymund Manimbo, chief of the Bureau of Fire Protection in the city.

In Davao City, 10 people were arrested in separate operations for violating its 15-year-old firecracker ban between 6 a.m. on Sunday and 6 a.m. on Monday, police said.

In Central Luzon on Tuesday, 149 cases were recorded in the region, still lower by 71 percent than the 521 cases recorded in 2017, according to the Department of Health (DOH).

The injuries were mostly caused by “piccolo,” a banned firecracker, and “kwitis” (skyrocket).

In Pangasinan, the number of blast victims increased to 79 on Tuesday. The number was 13 percent lower than last year’s 91 victims, said provincial health officer, Dr. Anna Maria Teresa de Guzman. She said 35 victims were minors aged 10 to 19 while 65 others were aged 2 to 14.

Twenty-seven victims were earlier reported in other provinces in the Ilocos region.

Blast injuries also increased to 22 in the Cordillera as of Tuesday. Hospitals treated four cases in Kalinga; six in Benguet; four in Apayao; three in Baguio City; two in Abra; two in Ifugao; and one in Mountain Province.

The DOH said 44 of the injuries were caused by piccolo.

The only stray bullet case on record involved a 41-year-old man from Jose Panganiban town in Camarines Norte.

In Mimaropa, 10 firecracker injuries were listed by the police from Dec. 31 to Jan. 2. Five of them involved minors. —Reports from Frinston Lim, Tonette Orejas, Gabriel Cardinoza, Ma. April Mier and Madonna Virola