Cop, 2 others killed in bomb blasts in Mindanao 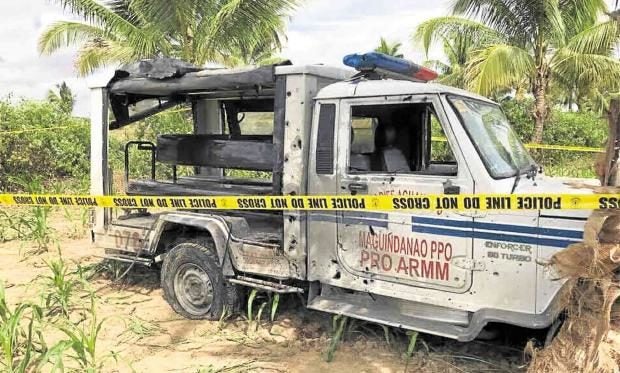 A police officer aboard this patrol car was killed after a bomb hit the vehicle at Shariff Aguak town in Maguindanao. (Photo by FERDINANDH CABRERA /AFP)

TACURONG CITY — Three people, including a policeman, were killed while 23 others were wounded in separate bomb blasts in the provinces of Sultan Kudarat and Maguindanao on Sunday and Monday, police said.

In this city in Sultan Kudarat, an improvised explosive device (IED) went off inside a moving tricycle on Sunday night, killing two persons.

The blast wounded 16 people, including those by the roadside as they prepared for New Year’s Eve celebrations, said Senior Supt. Raul Supiter, provincial police director.

Supiter said the explosion happened at 11:05 p.m. along the national highway at Barangay Buenaflor inside a tricycle bound for Isulan town.

He said tricycle driver Dominador Datahan, a resident of Barangay New Isabela here, was killed along with one of his passengers, Aladin Laguiab, a resident of Datu Abdullah Sangki town in Maguindanao.

The other tricycle passenger, Ali Suharto, was wounded along with 15 other people outside Villa Garde KTV Bar at the time of the blast.

“The [bomb] went off inside the tricycle as evidenced by the shattered roofing of the vehicle,” Supiter told the Inquirer.

He said investigators were trying to determine whether the tricycle passengers were carrying the explosive.

“It could be a case of premature explosion of an IED,” he said.

Supiter said it was also unclear if the bomb was intended for a target in the city.

Explosions blamed on groups extorting money from businessmen here or on members of the Bangsamoro Islamic Freedom Fighters (BIFF) had taken place in the city.

Supiter said the bombs used in the April 17 explosions were similar to those used in previous bombings in the region and could be the work of the BIFF.

The BIFF was also eyed as behind the March 2017 explosion that injured eight people in front of the office of the Sultan Kudarat Electric Cooperative.

In Maguindanao, a police officer was killed while seven policemen and soldiers were wounded in roadside bombings suspected to have been done by BIFF members, authorities said.

He died while at Maguindanao Provincial Hospital, just a few meters away from the blast site at Shariff Aguak.

On Monday morning, two soldiers were wounded after another bomb went off as government troops were patrolling Barangay Limpongo in nearby Datu Hofer town.