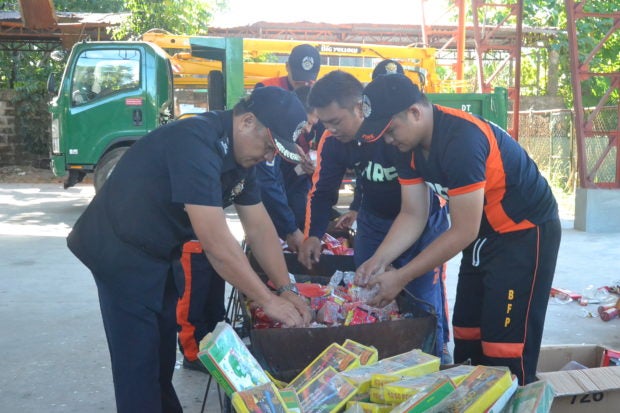 Chief Insp. Jimmy Suba, Tarlac City fire marshal, leads the ceremonial destruction of firecrackers seized from 189 stalls that did not have permits to sell pyrotechnic devices in the city. Photos by Maria Adelaida Calayag / INQUIRER

TARLAC CITY—-The city government destroyed P500,000 worth of firecrackers on Saturday (Dec. 30) which were seized by a local task force from 169 stores that have not secured permits to sell the firecracker and pyrotechnic products.

Boxes of assorted firecrackers, which were confiscated in a 4 p.m. inspection drive along F. Tañedo Street on Dec. 29, were placed inside drums and soaked in water by the members of the Oplan Safe Angel Task Force formed and led by Mayor Maria Cristina Angeles.

The task force is composed of the police, the Bureau of Fire Protection, the city public order and safety office and the city disaster risk reduction and management office.

“The stalls selling firecrackers need to secure a permit, and must set up at a designated firecracker zone as mandated by Republic Act No. 7183 (the law regulating the manufacture, sale and distribution of fireworks and firecrackers). We have a zone designated for firecrackers where children are prohibited to enter, and a zone for pyrotechnic devices,” said Supt. Bayani Razalan, Tarlac chief of police. /jpv