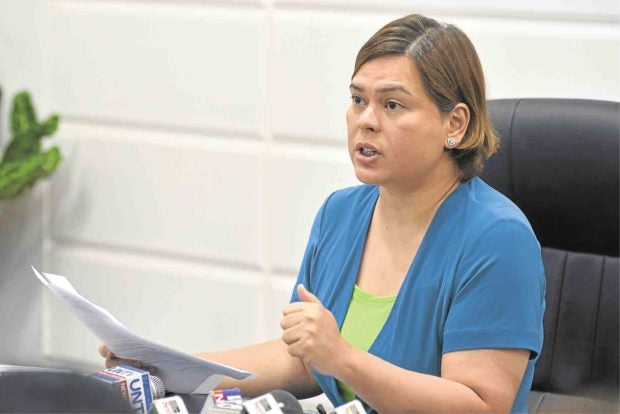 The mayor said she made the decision after her impartiality was questioned, especially on social media.

The city government would have sent officials from the city engineers office and the Central 911 to provide information to the task force looking into the incident that killed 37 call center workers and one mall employee.

On Thursday, Duterte broke her silence regarding questions about her impartiality in connection with the NCCC Mall fire.

“[T]here have been suggestions that I should inhibit myself from the investigation of the NCCC mall fire because of an endorsement contract,” she said in a statement.

But she said she could not inhibit because she was not a member of the investigation team.

“For the record, I am not part of the investigation team,” she said, adding that she never volunteered to be part of the probe.

“[U]nder normal circumstances, a City Mayor does not sign fire investigation reports of the BFP,” she added, referring to the Bureau of Fire Protection.

Sara also corrected perceptions that she was an endorser for NCCC Mall.

“I am not an endorser of the NCCC mall, but I have a commitment with Choice Mart, which is another company of NCCC supermarket,” she said.

Sara also responded to criticisms, mostly on social media, about her response to the crisis.

“Nobody can question how I did my work as Mayor in helping the family of the victims, the BFP, the NCCC, and SSI officials. The way my staff and (city social services) handled everything during the evening of December 23 until today prevented chaos and hysteria among the victims and Dabawenyos in general,” she said.

Sara lamented that the some people have used the incident to look for fault in her.

“I welcome any investigation on how I did my work in this particular matter,” she said. /cbb