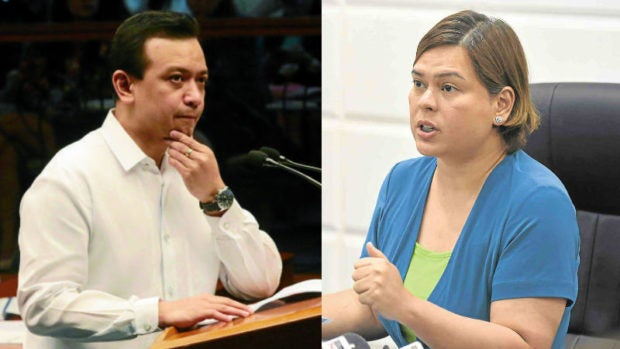 DAVAO CITY–Mayor Sara Duterte on Friday said she has thrown her support to her husband, lawyer Manases Carpio, and her brother, resigned Vice Mayor Paolo Duterte, in their decision to file civil suit for damages against Senator Antonio Trillanes IV.

Sara told reporters here that what Trillanes did to her family members was too much.

She said she hoped the suit would prosper in court.

Paolo and Manases filed the civil suit against Trillanes before the City Prosecutor’s Office here.

In their complaint, Paolo and Carpio said the senator had maligned them by implicating them in the smuggling of P6.4 billion worth of “shabu” (crystal meth) into the Philippines from China through the Bureau of Customs in May.

Lawyer Kaiser Kate Narciso, clerk of court of Branch 15 of the Regional Trial Court here, confirmed on Thursday that the complaint had been raffled off to her branch of the court.

Narciso said Paolo and Carpio were seeking damages but she could not specifically say how much.

“The case folder is already with Judge Mario Duaves,” she added.

Trillanes, meanwhile, described the complaint as “nothing but another harassment suit because our corrupt and coopted justice system (has) become the refuge of the Duterte scoundrels.”

Trillanes warned the elder son of President Rodrigo Duterte and Carpio that he would go after them.

“Just be sure that (you’ll) be in power forever because I have made it my life’s mission to make your murderous and corrupt clan accountable for your actions,” Trillanes said. /jpv