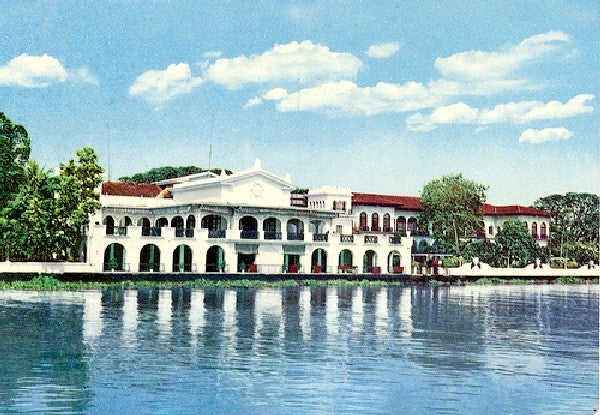 A government employee requested to have a pre-nuptial photo shoot in Malacañang, following the advice of Isabelle Duterte to a netizen, after the presidential granddaughter had her pre-debut shoot inside the seat of Philippine government.

The teen drew flak for the photo shoot, which included a picture of herself posing before the presidential seal.

In answering detractors, she tweeted that she “sent a request in the office” to secure approval for her photo shoot. 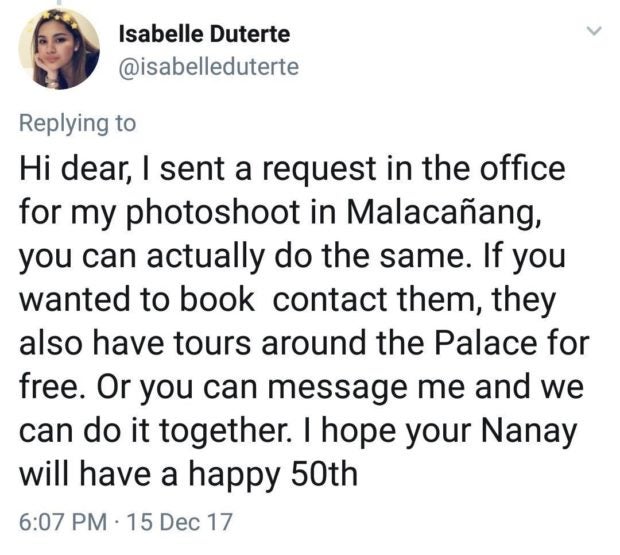 “You can actually do the same,” she told a netizen. She also said free tours were available and that she could be a companion in the tour.

Following Isabelle’s advice, a 24-year-old government employee from Manila tried his luck in booking Malacañang for a prenuptial shoot.

In an exclusive interview with INQUIRER.net, he explained, “I wanted to know if I can [be accommodated]—like how Isabelle showed she can, following her tweet.”

The employee, who requested INQUIRER.net to keep his identity anonymous, emailed the Malacañang Presidential Museum and Library ([email protected]) on Dec. 19.

His email stated, “My fiance (sic) and I are looking for a historical place to shoot our prenup. Unfortunately, multiple sites has (sic) already declined our request.”

“We were about to lose hope with our search until we saw Ms. Isabelle’s pre-debut photoshoot in your premises. Our hope was further strengthened when she, through her Twitter, encouraged us that we can send a request to you to conduct a similar activity/function within your premises.”

The groom-to-be asked if he and his fiancee could have the shoot “around the week of January 3 to 5, 2018—or days before our wedding.”

“There is no other historical place that can compare to the seat of the highest official of our government,” he wrote.

He received a response today from the Tours and Visitor Relations Unit.

Screengrab of the reply email received by the government employee. INQUIRER.net file photo

The message read, “The Presidential Museum and Library is only authorized to facilitate tours in the museum located in Kalayaan Hall.”

“Any other activity, especially those of a personal nature, in any location in the Malacañang compound is subject to the approval of the President or his duly-designated deputies,” the reply further stated.

The employee, who has been working for two and a half years in government, said he had expected “to be turned down in some way.”

“Even if I was hopeful, alam kong (I know) I was nobody to be granted a prenup inside the premises of Macalañang,” he said.

The employee has yet to confirm if he will pursue seeking permission from President Rodrigo Duterte or his deputies. JB

Photographer speaks out on costs of Isabelle Duterte’s Malacañang pictorial