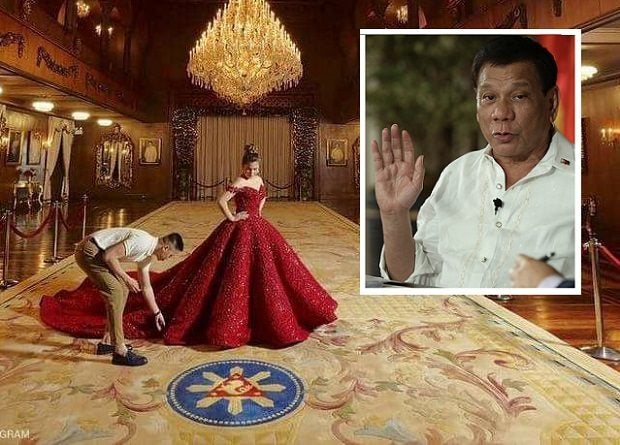 It’s a small matter. That was how President Rodrigo Duterte (inset) defended the pre-debut photo shoot of his granddaughter Isabelle Lovelie in Malacañang. The President said other people have their pictures taken inside the Palace, so why can’t the daughter of his son, Vice Mayor Paolo Duterte. ISABELLE LOVELIE DUTERTE SOCIAL MEDIA POST BY JEFF GALANG / INQUIRER FILE

“You know that girl, ang nanay nya Maranao. May mga (kaanak) ako na Muslim. Kaya kayong mga Moro don’t be offended by my words. I am just trying to tell you that there’s a problem which we have to solve together,” he added.

Photos posted by members of her style team on Instagram showed a stunning Isabelle posing inside the Palace and on its grounds in different gowns, including a voluminous, off-shoulder red one by Dubai-based designer Garimon Roferos.

The photo showed her in a pink gown posing before the seal of the President and beside the Philippine flag. In another photo, she was in a red gown at the carpeted hallway leading to Rizal Hall, the venue for many of the official events held at the Palace.

A third photo showed her in a floral dress before the fountain at the Palace’s grounds.

Isabelle captured the attention of some netizens for her princess-like beauty in what appeared to be her fairy-tale palace.

But she also earned the ire of other social media users who saw the Palace as an inappropriate venue for her pre-debut photo shoot. /cbb