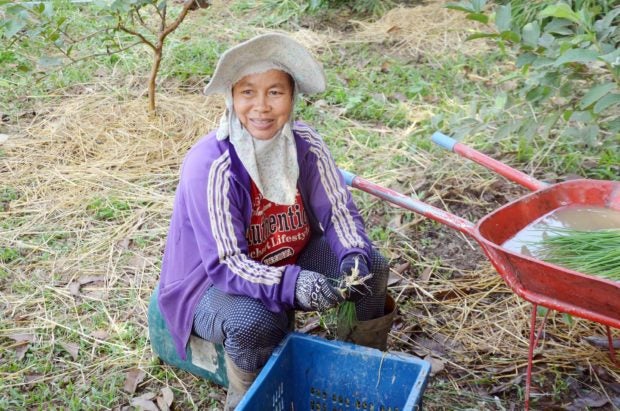 Early in the morning every Saturday and Wednesday vendors wearing greenshirts gather at the That Luang esplanade for the Vientiane Organic Market. One woman, aged about 45, who wears her hair in a neat bun and is always smiling while selling her vegetables is Ms Buakham Philavong.

Vientiane Times went to Thaxang village in Pakngum district, Vientiane, to talk to Ms Buakham after Prime Minister Thongloun Sisoulith visited the village while touring farms in Pakngum district last month. The village is one of many places on the outskirts of the capital that now grow organic vegetables.

Thaxang village Head Mr Thadsany Philavong is head of the village’s vegetable production group and also Ms Buakham’s husband. He told the prime minister that the village has 275 hectares of agricultural land, including 230 hectares of rice fields and 45 hectares of other crops.

In 2010 farmers in the village were organised into groups to grow organic vegetables. The first group consisted of only eight families to begin with, but now has 82 families.

Ms Buakham family’s was one of the original group of eight. She was a keen proponent of organic farming as she believed vegetables grown this way were beneficial for both consumers and farmers and would also bring in more income.

Not having much experience in growing vegetables, Ms Buakham’s family didn’t want to go it alone so they pooled their resources with their neighbours and planted a plot of lettuce. They each invested 10 million kip but the venture was not a success and they lost a lot of money.

Later, the Ministry of Agriculture and Forest held a short training course in the village about how to make organic fertilizer and insecticide, which helped Ms Buakham to grow more crops.

The family then borrowed money from the bank to build greenhouses so they could grow many kinds of vegetables and fruit, which proved very popular at the Vientiane Organic Market.

Almost one hectare of their land is now given over to papaya, guava and banana trees along with lettuce, Chinese kale, spinach, chilli, morning glory and other vegetables.

But many of these crops don’t grow very well in Laos because the winter is short and these plants suffer in hot weather when they are susceptible to insects and disease.

To keep insects at bay, Ms Buakham uses insecticide she makes from khomkadon, khuakhaohor, dokdaohuang and ginger but it protects the crops for only a few days.

On Tuesdays and Fridays she and her husband spend the day tending to their crops and packing them up ready for transport to the market the following morning. They usually work until 9pm, go to bed late and wake up early the next day.

“Our village is a long way from Vientiane so we wake up at 2am to load up the crops. The road isn’t very good so the journey takes a while and we usually arrive at the market at 5am, where we sell our produce until noon,” Ms Buakham said.

They don’t always sell everything they’ve brought and some days they still have a pile of vegetables left unsold when the market closes.

But this doesn’t often happen and vendors can exchange theirproduce if they have a lot left over.

The market brings in a good income for the family, netting one to two million kip a week. Their savings paid for two of the children to go to university and they now have good jobs in Vientiane.

Ms Buakham continues to work with her husband on their smallholding, although not as hard as they used to. They don’t want to stop even if the children suggest it sometimes because for them their farm is their home.

They feel that’s where their life and satisfaction lie and it provides them with a nice time with the family at weekends when their children come along to lend a hand.