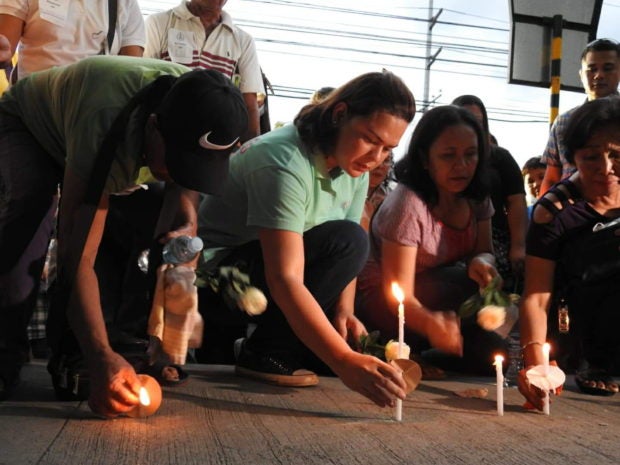 DAVAO CITY — Davao City Mayor Sara Duterte on Wednesday declared NCCC Mall “fire safety compliant” as the death toll from the blaze that tore through the building on Saturday rose to 38 after the body of a  mall security officer was recovered.

Melvin Gaa, the security officer, died trying to rescue people trapped in the fire at the four-story New City Commercial Center (NCCC), the operators of the shopping mall said.

Also killed in the 32-hour blaze were 37 employees of a 24-hour call center for US-based market research company Survey Sampling International (SSI) on the top floor of the building.

President Rodrigo Duterte, who hails from Davao City, has vowed to get to the truth of the blaze.

Labor groups charged that the high death toll was a sign safety rules were not met, a claim denied by the mall operators.

“We categorically deny the allegations that we do not have enough fire exits, extinguishers, sprinklers and designated fire escapes,” Thea Padua, a spokesperson for NCCC Mall, said in a statement on Wednesday.

“We have been fully compliant with the labor standards,” she added.

Mayor Duterte, a daughter of President Duterte, told a news conference on Wednesday that as far as her office was concerned, the shopping mall had been fire safety compliant.

She said fire safety compliance was among the requirements for business permit renewal and fire officials inspected NCCC Mall every year.

“During renewals, there would even be issues that would come out, such as delayed issuance of clearances because inspections had to be properly done [by agencies, including the Bureau of Fire Protection],” she said.

City Fire Marshal Honey  Fritz Alagano told the Inquirer by phone that safety officials found no violations by NCCC Mall during the inspections.

To be declared fire safety compliant, a building as large as NCCC Mall must have a fire alarm system, sprinklers and fire exits, Alagano said.

NCCC Mall even had a company-owned firetruck, she added.

Alagano said the BFP also conducted quarterly fire drills with the shopping mall’s employees and tenants, as it did with workers and tenants of other establishments in the city.

Padua, the spokesperson for NCCC Mall, said the last fire drill was conducted on July 14 “for the third quarter” and that the operators also ordered regular inspection and maintenance of the building’s safety facilities.

Alagano said reports about malfunctioning fire alarms and sprinklers in the shopping mall could not be confirmed as of Wednesday.

“Information spread through social media by survivors and concerned netizens pointed out [that] fire alarms and sprinklers did not function during the [fire], and no evacuation system was made to bring the SSI employees to safety,” Carl Anthony Olalo, the regional head of Kilusang Mayo Uno in Southern Mindanao, said on Tuesday.

Alagano acknowledged that fire alarms and sprinklers could fail, but no one could predict when this would happen.

“It might have malfunctioned then. But during inspections and. . . fire drills, [NCCC’s] system worked well,” she said.

As to why the authorities did not demolish a portion of the burning building to rescue the trapped SSI employees, Senior Supt. Wilberto Rico Neil Kwan Tiu, the BFP regional chief, said doing so would have further fanned the flames and escalated the fire.

“We did not resort to that because it might make the flames grow bigger, as oxygen, an essential component of combustion, could come in,” Kwan Tiu told the Inquirer by phone.

Drilling holes through the roof was also not feasible because of “the compromised integrity and stability of the structure,” Kwan Tiu said.

The firefighters, he said, used “horizontal ventilation” to let thick and toxic smoke escape, allowing them and other responders to slowly make their way into the building.

Kwan Tiu also denied reports that some firetrucks ran out of water at the height of the fire.

The Davao City Water District said all of the 800 fire hydrants in the city, including several units located near the shopping mall, were functioning during the fire.

Mayor Duterte said a multiagency task force led by the Department of the Interior and Local Government would be formed to investigate the fire.

The Federation of Free Workers (FFW) has offered to help the investigation through its trained safety officers.