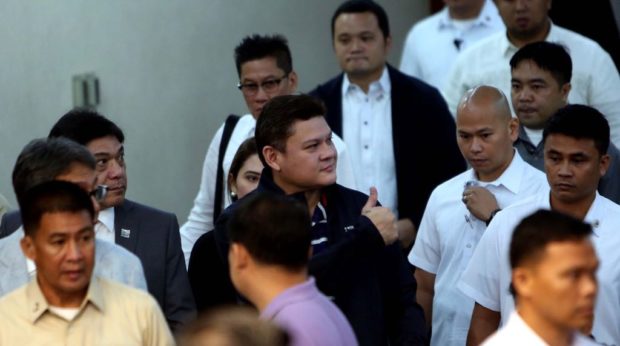 “Paolo Duterte made the supreme sacrifice of resigning as Vice Mayor of Davao, he most likely wanted to spare the President of further controversies from both personal and political issues,” Senator JV Ejercito said in a text message on Monday.

“He has his personal reasons but then it shows that Vice Mayor Pulong respects delicadeza and he has honor to protect. It also proves he is not the ‘kapit tuko’ type. He deserves our respect,” Sotto said in separate text message.

Ejercito and Sotto both belong to the majority bloc in the Senate.

In a resignation letter he read during a special session of the city council, Duterte cited as reasons for his resignation his failed first marriage, the dragging of his name into the P6.4-billion worth of shabu from China that slipped past the Bureau of Customs (BOC) and his “very public squabble” with his daughter, Isabelle.

“The other person in this failed relationship is incorrigible and cannot be controlled. And I take responsibility for all that has happened as a result of a wrong decision to marry at a very young age,” he said.

“When I was growing up my parents never failed to remind me of the value of kind-honored principle of delicadeza, and this is one of those instances of my life. I take responsibility for what has happened,” he added.