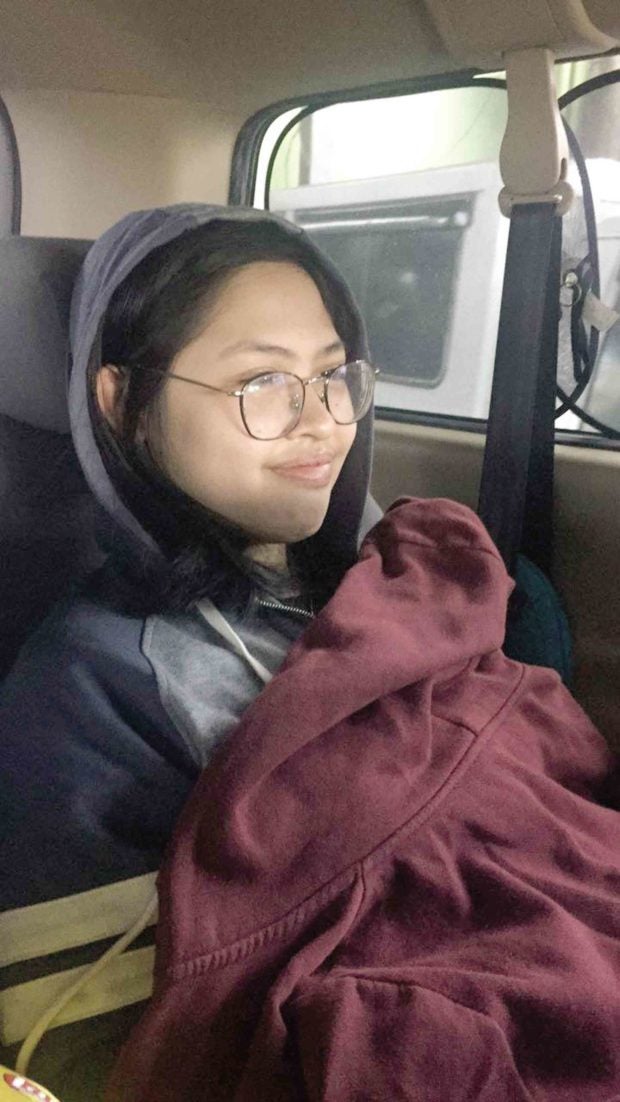 Shortly after Ica was found, her sister, Bea, shared this photo with the message: “Ica’s going home guys. She had NO IDEA we were all looking for her!!!” —PHOTO FROM BEA POLICARPIO’S FACEBOOK PAGE

It was a touching moment when the family of Patricia “Ica” Policarpio fetched her on Sunday from the house of a barangay councilor in San Pablo City, Laguna province.

The 17-year-old girl who was reported missing on Dec. 21 was found more than 60 kilometers from where she was last spotted, at a parking lot near a convenience store in Sucat, Muntinlupa City.

“It was like a family reunion. They were taking pictures,” Leonardo Villanueva, Barangay 2B chair, told the Inquirer in a phone interview.

According to Villanueva, Policarpio was found at a 24-hour eatery in the area. A resident, Manuel Fronda, first spotted her inside the eatery shortly past midnight and thought she was just waiting for someone.

But when he returned at daybreak to buy some bread, Fronda again found the teenager in the same spot. When he finally approached her, she started crying.

“She gave us her name but we didn’t know right away she was the missing teenager on Facebook,” Villanueva said.

Since she disappeared on Thursday, Policarpio’s family and friends had been posting messages asking for help on social media which were shared numerous times.

Villanueva then tried calling a phone number that Policarpio said belonged to her mother.

When Policarpio’s mother confirmed that her daughter was there, the family drove down to San Pablo City.

Local authorities said they were clueless on how Policarpio  found her way to Laguna.

But Senior Supt. Dante Novicio, Muntinlupa police chief, said they learned from reports that from Sucat, the teenager was seen taking a UV Express to Quezon City.

From there, she rode a bus to Lucban, Quezon province, where she stopped by a church, before taking another bus to San Pablo City. “Her journey ended there probably because she [had run out of money],” Novicio said.

In a press conference, Policarpio’s father, Rufino, said he had yet to talk to his daughter about why she disappeared. He admitted, however, that they had a “discussion” beforehand.

Rufino expressed relief at her return, calling it “the best Christmas gift ever. I am just very joyful. I am beyond happiness knowing that so many people care for us.”

Director Oscar Albayalde, National Capital Region Police Office chief,  meanwhile, also thanked the public for their help. “Ica’s return to her family in time for Christmas is a classic example of public cooperation. This is a show of unity and the Filipino ‘bayanihan’ spirit in time for the holidays.”

Rufino said the experience taught him to “give more time and more concern to our children.”

“Let’s give our children more understanding and more patience. Let us try to be more sensitive and listen. Please care for your children,” he added.