A gift that keeps giving 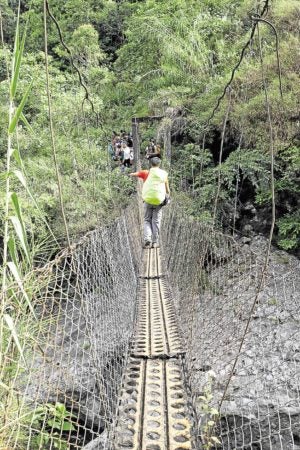 BALANCING ACT Crossing a rusty hanging bridge is part of the adventure, the volunteers say.

Some 300 kilometers from Manila lies Sitio Toplac in Kapangan, Benguet, where pasta, “AlDub,” K-pop and Facebook are virtually unknown.

But for a group of mountaineers and city slickers who visited this remote village some 1,500 meters above sea level, the lush forests, waterfalls and fresh air more than make up for the community’s lack of access to the conveniences of the modern world.

Still, things could be better, the urban dwellers thought as they trekked to the village a week before Christmas, noting how the lack of electricity, the one-hour hike from paved roads to the community, and the absence of connectivity had limited the opportunities among the children of the Kankanai tribe who dwell in these parts.

The 10 volunteers—a nursing student, a seaman, a writer, a human resources professional and the mostly young mountaineers from “Air Up There”—trudged through uphill terrain for four hours and crossed rivers and rusty bridges to deliver gifts, school supplies, sports equipment, slippers, clothes and food items to residents in Sitio Toplac.

“We came back because Toplac is different from other communities I’ve been to,” said IT developer Ken Molina, who organized the trip. “Here, parents are willing to do anything to enable their kids to go to school. And it is the teachers themselves who solicit money for their students’ school supplies.”

This trip, Molina said, was inspired by two teachers he had met on another trip.

The trek was an adventure as well for Inquirer employees who had previously distributed school supplies, sports equipment and 25 units of solar lighting kits to the community. 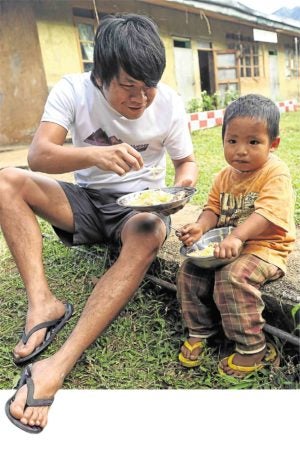 EATING OUTA mountaineer and a local kid share a meal.

Traveling “topload” (or riding atop jeepneys) and taking four hours to get through a distance that locals normally cross for an hour was like trekking across four mountains. Crossing four rusty hanging bridges across Amburayan River seemed like forever.

It was quite a relief to be met by the locals—old women and children who hefted the donations on their backs as if the load were not heavier and bigger than them.

The donations would go a long way in the village, noted Biyernes Pallasac who, like most villagers, earns a living by farming. Pallasac would sometimes exchange a pail of palay for P20 to add to his earnings that can hardly support his nine children,
including one who can’t walk because of a congenital illness.

A barangay councilor, Jeter Tacap, was as thankful: “The solar lamps given us really helped. It used to be that students had to make sure that they’d finish their assignments before it gets dark. Now, through the solar lamps, they can also study at night.”

The solar panel also helped in charging their cell phones, Tacap said, although the units were not enough, he added.

Tacap’s eldest, Virgie, admitted that they used to eat only twice a day and would skip dinner because of the dark. Now, with the solar lamp, they share three meals, she said, smiling.

The possibilities now seem endless for Virgie, who dreams of becoming a doctor. “I’ll study hard so I can help those in need. We don’t have hospitals here,” she said of the nearest medical facility that is at least a four-hour walk away.

Aside from more educational materials and supplies, Toplac Barrio Elementary School seems to have benefited too from the largesse of outsiders. From three classrooms, there are now four that serve 59 grade school students.

One of the elementary school’s two assigned teachers, Evelyn Acop, 40, recalled how the solar lamps had helped her do her job better. 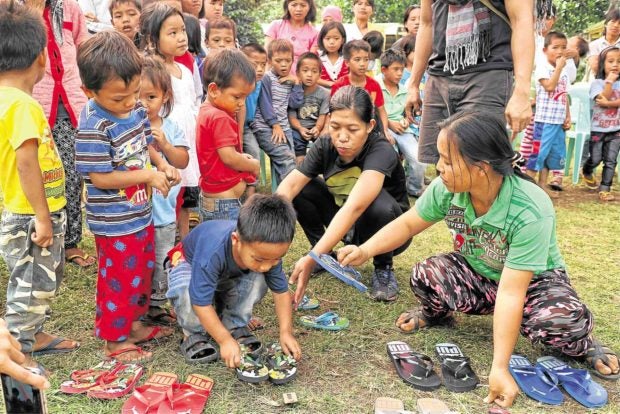 TRYING IT ON FOR SIZE A kid scrambles for a donated pair of slippers.

“It’s difficult to teach without electricity, especially at night when I have to make a lesson plan,” said Acop, who lives two and a half hours away from the school.

On weekdays, she and the other assigned teacher, Baguio resident Rowena Cañada, 32, stay at a house provided by the community. On weekends, they go home to their family.

“It’s really hard teaching in a remote village,” Acop said. “There’s the rain, the long hours of walking, and sometimes, I get nervous, too,” she said, adding that she had already encountered two snakes on her way to school.

“My motivation, of course, is my family. I also want to earn, and see all my students finish college,” Acop said. 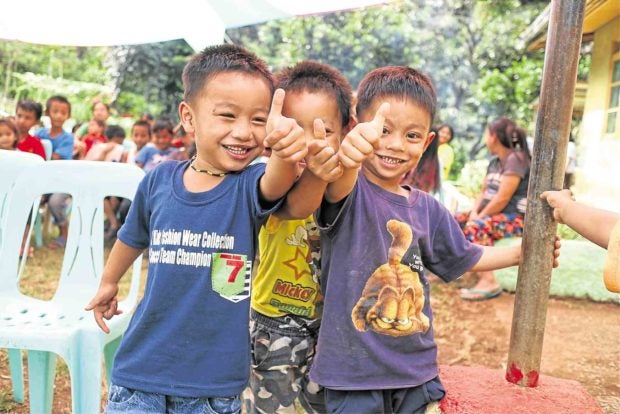 SIMPLE JOYS The sight of new friends come to visit is enough to light up these young faces.

But the children find it difficult to learn Filipino, she added. Unlike other students who watch television and gain additional knowledge from it, the children here don’t hear Tagalog natives speaking the language, she said.

While Acop believes that the students could use more exposure to technology, Cañada said they needed more storybooks and other learning materials to help them comprehend their lessons better, especially in Filipino.

But the trip had changed them as well, the volunteers said.

“This is my first time to serve a community, rather than myself. I’ll definitely be back with the requests of the community,” said Renz Datu, 26, a manager from Globe Telecom.

Christian Caballes, an IT employee from ABS-CBN, said this was the most remote community he had visited among the many mountains he had scaled.

“I usually hike for my own recreation with only ‘me’ in mind in my physical, spiritual or emotional getaway. But this is different because it was done with the purpose of bringing joy to other people in a location that I never even knew was inhabited.” 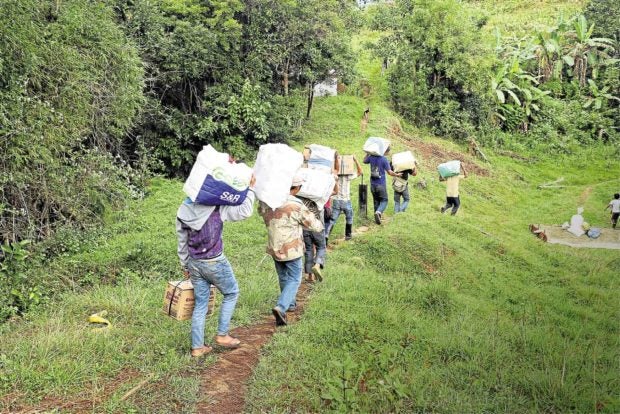 Molina vowed to go back as well, and donate something that will help the community start sustainable livestock farming. Recalling how a young student had suffered an epileptic seizure during our visit, he vowed to provide basic first aid to handle seizures as well.

Caballes meanwhile mused on the irony provided by Sitio Toplac to urban dwellers like them. “They have no electricity, intermittent water supply, inaccessible medical care and no access to stores to buy even the most basic goods. But still they thrive and survive,” he said.

He continued: “Yet we, who are living here in the city, where everything is served in an instant, still complain when we don’t get what we want. Maybe we should learn to live in the simplicity of it all.”