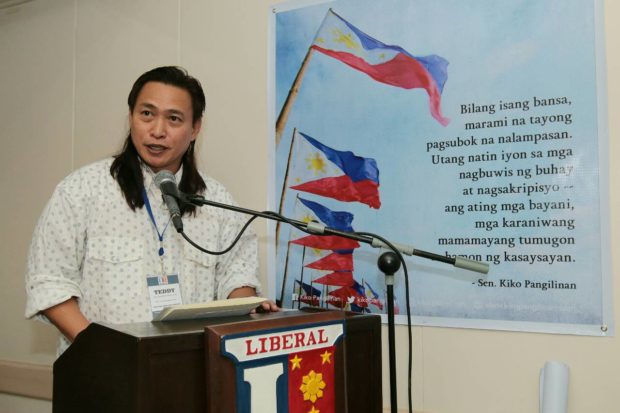 Liberal Party (LP) lawmakers, who got zero or reduced infrastructure budgets for their constituents, shrugged off suggestions they only got their comeuppance for the acts of the Aquino administration.

“I wouldn’t call it karma,” said Ifugao Rep. Teddy Baguilat Jr., one of 24 congressmen whose infrastructure funds were realigned at the behest of Speaker Pantaleon Alvarez.

“If opposition solons [during the Aquino administration] received nothing for their districts or pet projects, then yes [it’s karma],” Baguilat said.

“But the allocations were just delayed. [They were also] later released as former Minority Leader Edcel [Lagman of Albay] related,” he told reporters in a message thread discussion.

“But the tactic of using the budget process to favor some and marginalize others… I guess that’s par for the course,” he said.

Lagman, in a statement, said there is a difference between past practice and the House leadership’s surprise move against opposition lawmakers and some administration allies.

“In past administrations, only the releases of the erstwhile Priority Development Assistance Fund (PDAF) were withheld from the districts of a few ‘errant’ legislators,” he said.

“Now, the totality of infrastructure projects under the nationwide infrastructure program of the Department of Public Works and Highways (DPWH) previously intended for the deprived congressional districts were deleted from the General Appropriations Act (GAA),” Lagman said.

“Those projects are not even initiated or submitted by the concerned Representatives since they are already integral to the Duterte administration’s ‘Build, Build, Build’ policy being implemented by the DPWH,” he added.

Another affected congressman, Caloocan City Rep. Edgar Erice, said: “What the speaker took out in the budget is not pork, but regular infrastructure projects which passed a yearlong process by the DPWH to determine priority needs of each areas.”

“That’s why the President included it in the National Expenditure Program. During the Aquino administration even the districts of opposition leaders were given huge allocations,” he said.

“I can show you proof that many opposition leaders got bigger allocation than LP legislators,” Erice added.

The LP issued a statement describing the defunding of opposition lawmakers as “an undisguised show of power with a clear message: We can do it because we can. Do not oppose; everyone can be targeted.”