SWS: Duterte’s net satisfaction ratings up by 10 points in Q4 of 2017 | Inquirer News 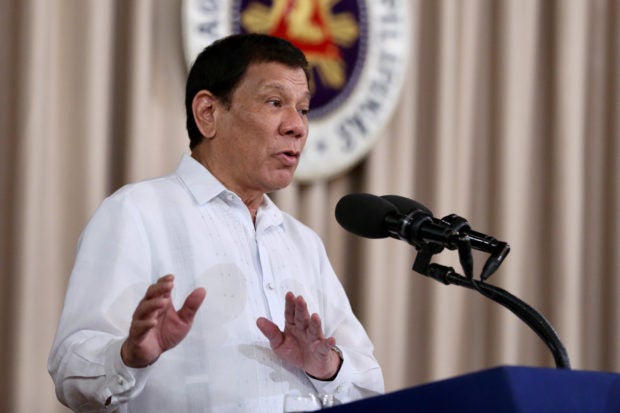 President Rodrigo Duterte’s net satisfaction ratings bounced back by 10 points to 58% in the fourth quarter of 2017, according to a Social Weather Stations (SWS) survey.

According to data released on Friday, the SWS said that 71% of adult Filipinos were satisfied with Duterte’s performance, 13% were dissatisfied while 15% were undecided.

The SWS classified Duterte’s latest net satisfaction rating as “very good,” an improvement from his 48% rating, classified as “good,” in September 2017.

The polling agency attributed Duterte’s 10-point rise to increases by 14 points in Luzon, 11 points in Metro Manila, 10 points in Visayas and 3 points in Mindanao.

Duterte’s net satisfaction rating remained “excellent” in Mindanao at 80%, backed by a 4 point increase from the survey results in September 2017, the SWS said.

Moreover, Duterte raked in “very good” net satisfaction ratings in both urban and rural areas, in all classes, among both men and women, among 25 year olds and above and in all educational levels.

The survey was conducted using face-to-face interviews of 1,200 adults (18 years old and above) nationwide, the SWS said. It has a margin of error of ±3% nationwide, ±4% for Luzon, and ±6% each for Metro Manila, Visayas and Mindanao. /je