'Global no' to US over Jerusalem as Israel's capital | Inquirer News

‘Global no’ to US over Jerusalem as Israel’s capital 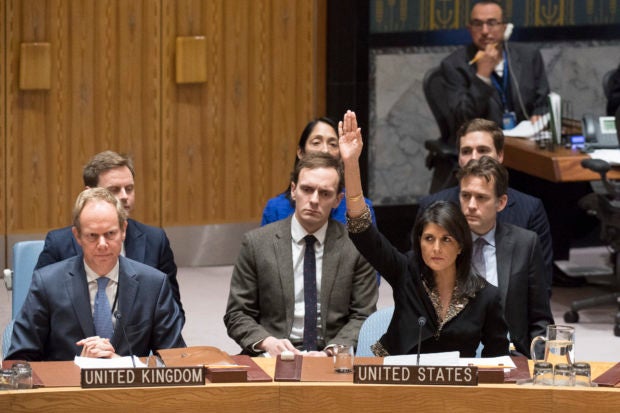 In this Monday, Dec. 18, 2017 photo, U.S. Ambassador to the United Nations Nikki Haley, right, votes against a resolution concerning Jerusalem’s status at U.N. headquarters. The United States on Monday vetoed a resolution supported by the 14 other U.N. Security Council members that would have required President Donald Trump to rescind his declaration of Jerusalem as the capital of Israel, a vote that showed the depth of global opposition to the U.S. move. Eskinder Debebe/United Nations via AP

UNITED NATIONS — Iran’s foreign minister has welcomed the U.N. General Assembly resolution rejecting the Trump administration’s recognition of Jerusalem as Israel’s capital, calling it a “global no” to intimidation by President Donald Trump.

Iran does not recognize Israel and supports anti-Israeli militant groups such as the Palestinian Hamas, which rules the Gaza Strip, and the Lebanese Hezbollah.

The General Assembly voted 128-9 with 35 abstentions in favor of the non-binding resolution.

In a message posted on Twitter, Erdogan says he welcomes the overwhelming support given to the “historic” resolution.

Erdogan says: “We expect the Trump administration to rescind without further delay its unfortunate decision, whose illegality has been clearly established by (the U.N. General Assembly).”

The General Assembly voted 128-9 with 35 abstentions in favor of the resolution.