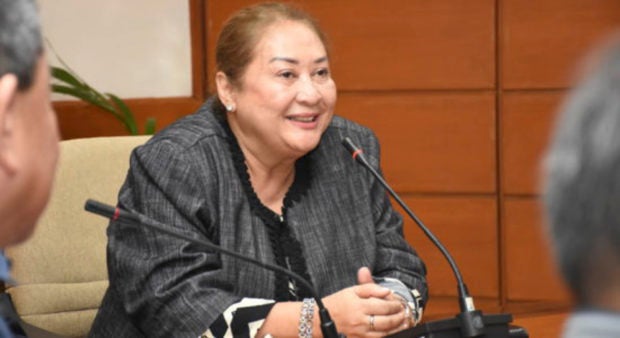 Another government official got the boot for frequent travels abroad, among other reasons.

President Duterte on Wednesday ordered the Development Academy of the Philippines (DAP) president, Elba Cruz, to vacate her post after she was accused of questionable acts, including traveling overseas almost every month.

Last week, Mr. Duterte fired Presidential Commission for the Urban Poor Chair Terry Ridon and four commissioners for going on junkets abroad and for failing to submit reports to him about its poverty alleviation programs.

In a letter dated Dec. 18, Executive Secretary Salvador Medialdea said Cruz’s term of office as a member of the DAP board of trustees had expired and that the President wanted her to step down immediately.

The DAP, located in Pasig City, is the government’s premier research and training institution.

“Considering that your term of office expired on June 30, 2017, and that you have been serving in the DAP in a holdover capacity, we now wish to inform you that, upon instructions of the President, your service in such holdover status is hereby discontinued effective immediately,” Medialdea said.

He noted that the President appointed Cruz as a DAP board member on March 14 to serve an unexpired term that began on July 1, 2016, and ended on June 30.

“To ensure uninterrupted delivery of public service, you are hereby directed to turn over all official documents, papers and properties in your possession to the proper office of the DAP,” Medialdea said.

“In her eight months in office, she was on travel abroad almost every month. Her frequent travels ‘could deprive the academy of executive time for physically managing the academy,’” the group said.

The DAP, through a statement from the its human resources and administration vice president, Emmanuel Silan, called the allegations “inaccurate” and “misleading.”

“Today (Wednesday) is our Christmas party and the Dappers were supposed to wear black, until we learned about the termination this morning. We are all very happy here,” Dapper president Gerald Cruz told the Inquirer.

Cruz was sacked more than a week after the employees submitted to Mr. Duterte their petition and held a press conference and a candlelight ceremony.

Dapper said its officers—Cruz, Earl Tongol and Francisco Gomez—were harassed by the DAP Office of the Chief Legal Counsel and DAP Human Resource Management Office in “a clear attempt to silence them.”

The association said Tongol was forcibly picked up by DAP security guards from his cubicle upon instructions of Cruz’s chief legal counsel for interrogation before being served a termination letter “effective immediately without any due process.”

“The rest of the employees who signed the petition and participated in the activities were threatened by their managers with termination and nonrenewal of their contracts upon Cruz’s orders,” Dapper said.

In its statement, the DAP said its president, Cruz, was continuing her support for the Duterte administration, adding that she was serving “under the pleasure of the President.”

“[T]he academy’s programs and operations will function as they should, regardless of the political uncertainty that the institution is presently experiencing,” it said.

The DAP board would announce the academy president’s replacement in the next 48 hours, according to Dapper’s Cruz.

“We will seek a dialogue with the new president so irregularities like these will not happen again. We will continue our cases and probing,” he said.