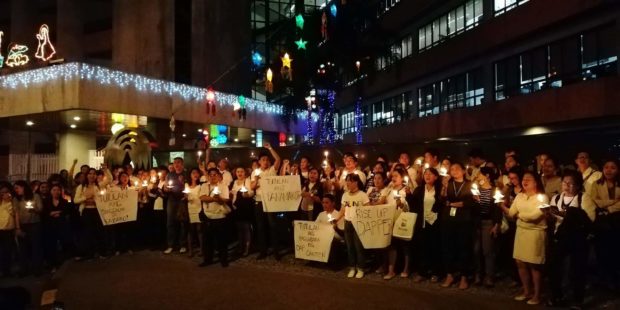 Union members and some employees of the Development Academy of the Philippines (DAP) have expressed their gratitude to President Rodrigo Duterte for his speedy and positive response to their letter-complaint against the DAP president over irregularities.

“We thank President Duterte for acting on our concerns. (Rest assured), we will remain vigilant to advance the interest of the employees,” Cruz said.

“Today is our Christmas party and the DAPPERs were supposed to wear black, until we learned about the termination this morning. We are all very happy here,” he told the Inquirer.

The termination was based on a Dec 18 letter signed by Executive Secretary Salvador Medialdea.

Atty. Cruz was appointed by Duterte March this year as member of the Board of Trustees, and was later elected president by the Board.

“Considering that your term of office expired on June 30, 2017 and that you have been serving in the DAP Board in a holdover capacity, we now wish to inform you, that upon the instructions of the President, your service in such holdover status is hereby disconnected effective immediately,” the letter said.

The DAP, through a statement from the Human Resource Vice President Emmanuel Silan, called the allegations as “inaccurate” and “misleading.”

Gerald Cruz said the DAP board will announce the president’s replacement in the next 48 hours.

“We will seek a dialogue with the new president so irregularities like these will not happen again. We will continue our cases and probing,” he said.

Gerald Cruz, who currently remains on floating status, was charged with administrative cases of grave misconduct and neglect of duty for leading a press conference against the president last week.

In a statement sent by Silan to the Inquirer, the DAP said Atty. Cruz is continuing her support for the Duterte administration, adding that she serves “under the pleasure of the President.”

The DAP statement refers to the concerted efforts of the DAPPER as a “hatchet job against Atty. Cruz” “initiated and maintained by some disgruntled employees of DAP” as early as two months after Cruz assumed office last April 1.

“The group of people who spent their working days plotting against the president of DAP wanted to get even with Atty. Elba Cruz for her effort to further professionalize the ranks of DAP and put the institution on the global scene,” it added.

“The DAP and Atty. Elba Cruz have repeatedly answered all their issues on point-by-point basis and has consistently proved that the allegations against her are fictitious. Being transparent in the way it does things, DAP has always maintained that the allegations were false, and that public records and other sources of facts and data will belie many of the conspirators claim against Atty. Elba S. Cruz,” it said.

DAP also praised Cruz for her “landmark action” of promoting and officially converting the status of 150 employees, which gave DAP its much needed boost.

“Despite the dynamic situation at the top leadership of the institution, the Academy’s programs and operations will function as they should, regardless of the political uncertainty that the institution is presently experiencing,” the statement said. /je