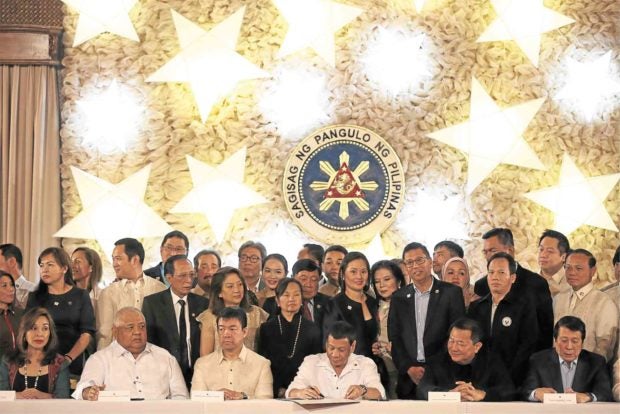 President Rodrigo Duterte on Tuesday signed the P3.767-trillion national budget into law, saying it forms part of the first step toward transforming the Philippines into an “upper middle class” country before the end of his term.

Next year’s budget will fund the administration’s ambitious infrastructure program, free college education in state universities and colleges (SUCs), universal healthcare, free irrigation, maintenance of peace and order in the country, and doubling of salaries of police and military personnel, Mr. Duterte said.

The budget, together with the Tax Reform for Acceleration and Inclusion (TRAIN) Act that he signed also on Tuesday, would steer the country toward faster progress, the President said.

“The implementation of these laws will serve as our national, initial step toward cutting the poverty rate to 14 percent and making the Philippines an upper middle class by 2022,” he said, reading from a prepared speech.

“Isn’t this too fast?” he added, to laughter from the crowd.

Of the total budget, 38.7 percent went to social services, followed by economic services, which got 30.5 percent, Legarda said in a statement. General public services got 16.4 percent, the debt burden 9.8 percent and defense 4.6 percent

Some P40 billion was allocated for free college education in all SUCs, local universities and colleges and state-run technical-vocational institutions. This is to implement the landmark law providing for free education in government-run tertiary institutions.

The Commission on Higher Education also got P250 million for free tuition for medical students enrolled in SUCs, while the Department of Information and Communications Technology was allocated P327 million to install Wi-Fi in SUCs.

Public schoolteachers will get an increase in their chalk allowance, which would go up from P2,500 to P3,500, under the Department of Education budget.

The Department of Health (DOH) budget included a special provision prohibiting the purchase of dengue vaccines. 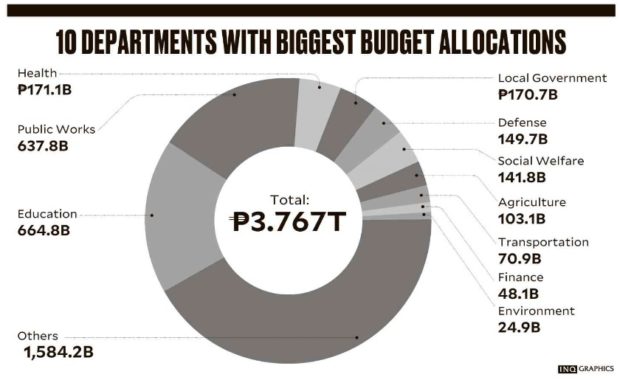 This came amid the controversy over the previous administration’s purchase of P3.5 billion worth of antidengue vaccines that could cause severe cases in those not previously infected.

The DOH budget was increased to provide additional funding for its medical assistance program for indigent patients and additional medicine for cancer patients.

The 2018 national budget included P62.8 billion to increase the base pay of military and uniformed personnel, in order to strengthen the military and police’s role in maintaining national security, and peace and order, Legarda said.

The Philippine Drug Enforcement Agency, which now leads the drug war, got an additional P1.2 billion to help expand its operations and for the construction of regional and provincial offices.

Congress realigned the budget for the Philippine National Police’s “Oplan Double Barrel” to go after drug suspects and the “Masa Masid,” which seeks to involve community members in reporting drug pushers in their areas.

The P1.35 billion was transferred to the housing programs for police and the military, while the P50 million was added to the budget for the acquisition of body cameras for the police.

The Department of the Interior and Local Government budget also includes P100 million for closed-circuit television cameras, P451 million for two helicopters, and P70 million for the Internal Affairs Service so that it could continue investigating erring police officers.

An additional P300 million was allocated to the Bureau of Corrections for additional prison facilities.

For the reconstruction and rehabilitation of Marawi, P10 billion was set aside under the National Disaster Risk Reduction and Management Fund.

The Department of Social Welfare and Development will get P89 billion to continue the conditional cash transfer program for the poorest of the poor.

A total of P2.08 billion was set aside for the rehabilitation of social welfare and activity centers and Bahay Pag-asa juvenile detention centers.

The Department of Trade and Industry was allotted P800 million for its Shared Service Facilities, a program intended to help micro, small and medium enterprises by giving them access to efficient technologies, skills, knowledge and systems.