‘Ambassadogs’ offer stress relief to UP students during ‘hell week’ 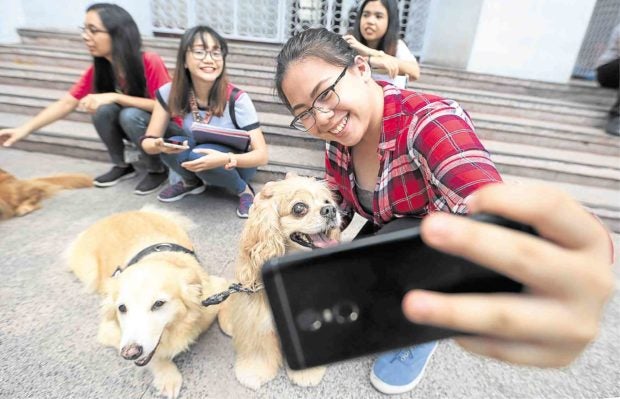 A student takes a selfie with Ginger. PHOTOS BY GRIG C. MONTEGRANDE

Who let the dogs out on the University of the Philippines campus in Diliman, Quezon City?

While technically, there is a ban on “man’s best friend” on the UP Academic Oval, the furry trio of Kimchi, Ginger and T-Bone was a welcome sight for students going through “Hell Week.”

The three, however, are no ordinary canines.

Known as the AmbassaDogs for the animal welfare group, Compassion and Responsibility for Animals (Cara), they visit schools and offices to promote responsible pet ownership while at the same time offer relief from stress.

Last week, the University Student Council invited the four-legged ambassadors for a two-day visit to help students destress as they wrestled with final exams and other end-of-semester requirements.

The trio were a hit as people could not resist stopping for a minute — some even longer — to give them belly rubs and behind-the-ear scratches.

Cara spokesperson Eric Suguitan, who also serves as the dogs’ “human parent,” said that a lot of studies have shown that animals, including dogs, can help eliminate anxiety and ease loneliness.

“Seeing them gives you a lighter feeling, a feeling of peace,” he told the Inquirer.

With the trio in tow, Suguitan has given talks almost every week on becoming better pet owners in different places of learning and work, including law schools and multinational firms.

“It really makes a huge difference when we have the dogs around,” he said, noting that their lectures become more engaging and lively.

The three dogs themselves have their own unique stories. Kimchi and T-Bone were both rescued, while Ginger—the eldest of the Suguitans’  fur babies—acts like an older sister.

Ginger, a golden retriever, and Kimchi, a cocker spaniel mix, also share a special bond. Ginger serves as the service dog for Kimchi who is blind.

In 2012, a malnourished and mangy Kimchi was rescued by Cara volunteers after he was abandoned by his owner and found roaming the streets of Alabang.

At that time, Suguitan and his wife, Thea, were looking to adopt a sibling for 12-year-old Ginger even though she was very picky and disliked all puppies introduced to her.

Ginger, however, immediately took to Kimchi when the couple visited the Cara clinic in Mandaluyong City.

The two dogs have been inseparable since, whether it be on walks or speaking (or more aptly, barking) opportunities.

T-Bone, also a golden retriever, was also adopted after his previous owner could not look after him anymore.

According to Suguitan, the Philippines still has a long way to go in practicing responsible pet ownership.

“We hope that through our AmbassaDogs, people will learn to be more responsible in looking after their pets,” he said, citing the importance of neutering and spaying, and the simple act of picking up after their dogs or cats when they litter.

“A dog is a lifetime commitment,” Suguitan said. “You don’t need to buy [a dog]. You can just adopt love. You may buy love but why not just give a home to someone who needs one?”

Read Next
A feast of Kapampangan food
EDITORS' PICK
Duterte: Authorities may take over hotels, but it’s not a ‘remedy’ in a democracy
When will PH get enough COVID-19 vaccines? ‘I really don’t know,’ Duterte says
Smart introduces Smart Barkada with the launch of Double GIGA
LT Group, Inc. Notice of Annual Shareholders’ Meeting 2/2
Duterte defends govt’s efforts vs COVID in 2020
Smart is fastest 5G Network in PH – Ookla
MOST READ
‘Duterte a total failure as leader. He must step down’ – group
Duterte ‘privately’ dealing with China invasion in West PH Sea – Palace
Ramon Tulfo says gov’t running PH like a ‘headless chicken’
Stop acting like a colonizer, PH business groups tell China
Don't miss out on the latest news and information.

TAGS: ambassadogs, CARA, Compassion and Responsibility for Animals, University of the Philippines Diliman