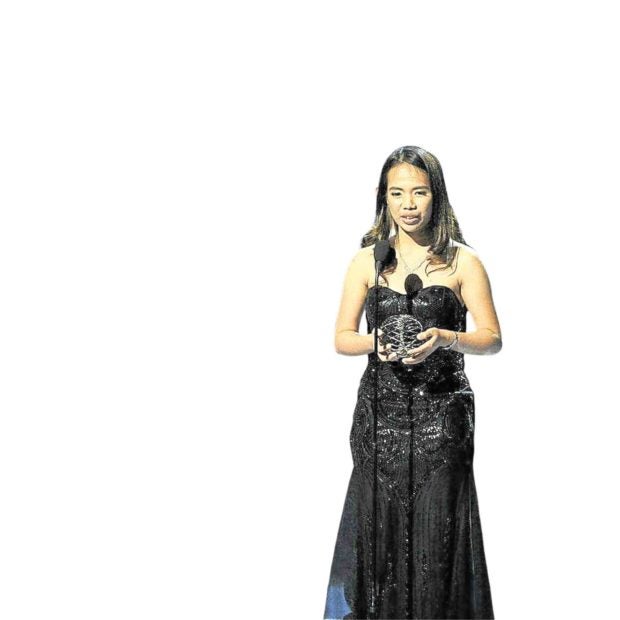 TACLOBAN CITY — While growing up, Hillary Diane Andales would always look up to the stars, amazed at how these lighted the skies.

At 4, when girls her age were busy playing with dolls, Andales was deep into astronomy books.

She was raised in a seaside village in Abuyog town, 87 kilometers from Tacloban City, her fascination with science influenced by her parents Imelda and Roy, who ran Prodigy Dev Center, which specializes in science and mathematics training.

“I always remember the days when we would just relax by the beach, enjoying and thinking about the waves and the stars,” said Andales, now 18 and a Grade 12 student of Philippine Science High School (PSHS) Eastern Visayas Campus in Palo town.

Andales, the eldest of four children, said she would look up and search for two kinds of stars — one that illuminates a dark sky and one that inspires her.

Roy sustained her interest in science, teaching her everything about the world in the most random places.

“He would explain things to me while driving a pedicab, while having dinner, while on the beach, while working,” Andales recalled.

Her love for learning science paid off when she bested 11,000 other students from 178 countries in a competition funded by, among others, Facebook founder Mark Zuckerberg.

Andales bagged the top prize in the third annual Breakthrough Junior Challenge early this month. She was flown to the United States for the awarding at the National Aeronautics and Space Administration’s Ames Research Center in California.

The Breakthrough Junior Challenge, according to its website, is an annual global competition meant to inspire creative thinking about science among the young, aged 13 to 18. It was founded by Zuckerberg and his wife, Priscilla Chan; Yuri and Julia Milner; Sergey Brin; and Anne Wojcicki.

Contestants are required to submit original videos, about 3 minutes long, that would “bring to life a concept or theory in the life sciences, physics or mathematics.”

The entries are judged on the students’ ability to explain complex scientific ideas “in engaging, illuminating, and imaginative ways,” according to the website.

In Andales’ case, the teenager used animation in explaining the theory of relativity and equivalence of reference frames.

The competition kicked off on Sept. 1, but Andales failed to land as the top scorer in the online competition. She, however, made it to the finals as Asia’s regional representative and later, declared the winner.

This was Andales’ second time in the competition. Last year, her video entry won “Top Popular Vote” prize after getting more than 300,000 views. While she automatically qualified as a finalist, her entry failed to snag the grand prize.

But as the winner of the Top Popular Vote, her school received a DNA molecular-biology laboratory worth $100,000 (P5 million), which was turned over last month by Cold Spring Harbor Laboratory.

Andales’ parents made sure that they provided their children with books, even as these competed for space in their small house.

So it was not surprising that Andales excelled in academics.

Andales was in Grade 7 at Abuyog Academy when she took and passed the National Competitive Examination to enter the PSHS in 2013. At that time, her parents decided to move their review center to Tacloban in March that year for better business opportunity.

But on Nov. 8 that year, Andales and her family and thousands others lost their homes when Supertyphoon “Yolanda” (international name: Haiyan), the strongest typhoon to hit land in recent history, swept through the Visayas.

The family lived in the village of Manlurip in San Jose district, one of the communities flattened by Yolanda in Tacloban, the typhoon’s ground zero.

Andales recalled that she, her siblings and their parents held on to the steel trusses of their house for nearly 3 hours while the storm surge was 4 meters below them.

“Fortunately, no lives lost in the family. It was a painful experience. We lost our home and all our property,” Andales said.

Andales is a candidate for valedictorian in next year’s graduation at PSHS Eastern Visayas Campus.

“She has imbibed the vision of the school to have a passion for excellence, pursuit for truth, and service to the nation,” said school director Rey Garnace.

The school, Garnace said, had declared a “Hillary Day” every Dec. 14 in honor of Andales.