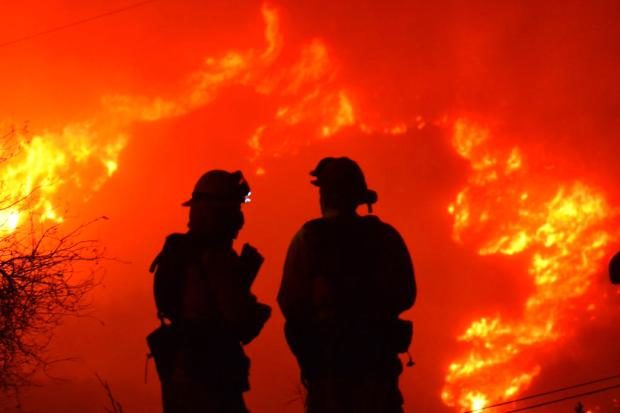 SANTA BARBARA, California — Calming winds Friday gave firefighters a chance to gain ground against a huge wildfire in coastal mountains northwest of Los Angeles, but the blaze continued to surge west, endangering thousands of homes, as forecasts called for a renewal of gusty winds.

The so-called Thomas Fire, the fourth-largest in California history, was 35 percent contained Friday night after sweeping across 400 square miles (about 1,036 sq. kilometers) of Ventura and Santa Barbara counties since it erupted Dec. 4.

Between Thursday night and Friday morning, the blaze claimed another 3,000 acres as it fed on brush and timber killed by California’s long drought or a week of hot, dry weather.

Santa Barbara has had only a tiny amount of rain since Oct. 1, the start of the new water year, and is more than 3 inches (7.6 centimeters) below normal to date.

Firefighters continued to carve firebreaks above the communities of Santa Barbara, Carpinteria, Summerland and Montecito and state fire officials said evacuations would be called as needed as flames advanced.

The fire already has destroyed more than 1,000 buildings, including well over 700 homes, and threatens 18,000 more structures.

Another focus of firefighting was on the eastern flank in canyons where a state firefighter was killed Thursday near the agricultural town of Fillmore.

The death of Cory Iverson, 32, was announced by Chief Ken Pimlott of the California Department of Forestry and Fire Protection but he released no information about the circumstances, citing an ongoing investigation by an accident review team.

Iverson was an engineer with a strike team from the San Diego area and had been with Cal Fire since 2009. He is survived by his wife, who is pregnant, and a 2-year-old daughter, as well as his parents and other family.

The National Weather Service forecast extreme fire danger or “red flag” conditions through at least Saturday evening, with winds gusting to 40 mph in the Santa Barbara County mountains where the fire is burning. Firefighters were facing first northerly “sundowner” winds through the night that could turn into northeasterly Santa Ana winds, driving the flames in another direction.

Everything about the fire was massive, from a footprint larger than that of many cities to the sheer scale of destruction that cremated entire neighborhoods or the legions attacking it: more than 8,000 firefighters from nearly a dozen states, aided by 32 helicopters and 78 bulldozers.

Meanwhile, firefighters continued to deal with the loss of their own. All 17 of the firefighters on Cory Iverson’s five-engine strike team were pulled off the fire lines after his death.

On Thursday night, Ventura County Sheriff Geoff Dean called for a moment of silence during a meeting for Fillmore residents.

“As I was up in the canyon and I watched his fire brethren remove his flag-draped body from the canyon in the hills above where we sit right here, I couldn’t help but think about his pregnant wife and his young daughter who will never see their husband and father again,” Dean said.

It was the second death linked to the fire. The body of a 70-year-old woman was found in a crashed car on an evacuation route last week.