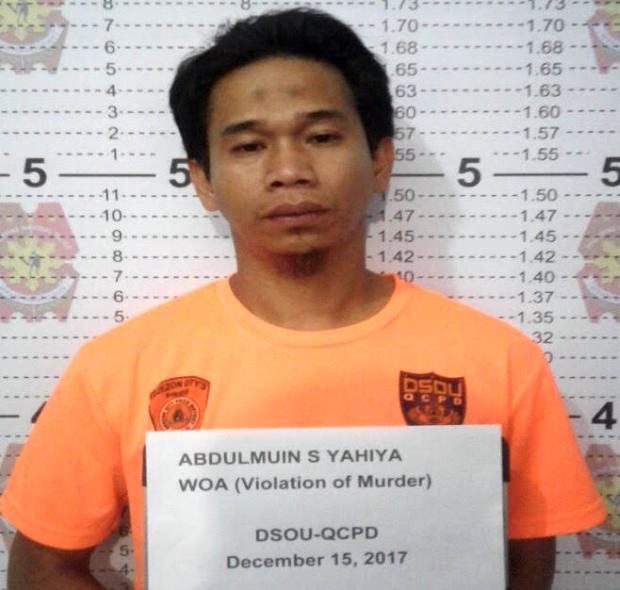 A suspected member of the Abu Sayyaf Group (ASG) who is wanted for murder in Basilan province was arrested by the Quezon City police on Friday.

Abdulmuin Yahiya, 35, was nabbed in a joint operation of the Quezon City Police District (QCPD) Special Operations Unit, the National Intelligence Coordinating Agency and the Naval Intelligence and Security Group of the Philippine Navy.

Chief Supt. Guillermo Eleazar, QCPD director, said the suspect, who also known as Mauhmin Yahya and Jayson, had been a resident at Basilan Street in Salaam Compound, Barangay Culiat, for the past three years.

In an interview with the Inquirer, Eleazar said the suspect had admitted his previous ties with the terrorist group, saying that he had worked for them as a courier.

He was also identified as a cousin of Hadji Taufik Sanihin Yahiya, also known as Nonong Yakan, a known ASG member.

Eleazar said Yakan was a member of the group under Zatar Yakub, also known as Abu Umran, who remains in detention in the New Bilibid Prison in Muntinlupa City.

Yakan also has a standing arrest warrant for nine counts of murder and four counts of frustrated murder in Basilan province.

“The suspect’s neighbors and the leaders of Salaam Compound did not know that he had a standing warrant, and they were caught unaware,” Eleazar said.

He noted that Yahiya worked as a tricycle driver and had been volunteering to keep the peace in the area mostly populated by Muslim residents.

“He was already working as a volunteer and had tried to avoid conflicts, but he now has to face the case,” he said.

Authorities also received information that Yakan, who allegedly had a safehouse in Bulacan province, had been frequently visiting the compound.

Eleazar said the police would keep a lookout if ever he would return to the area.

No weapons were recovered from the arrested suspect, he said. –With a report from Julius Leonen /atm

Read Next
Pagasa: New tropical depression to enter PAR on Dec. 20
EDITORS' PICK
Pagasa: Warm, sunny Sunday in most parts of PH
Is it safe to talk politics again at family gatherings? ‘The Reconciliation Dinner’ shows us what that’s like
House energy committee chair Arroyo bats for cheap electricity
EDITORIAL: To a bike-friendly future
The Best Tech Gifts For The 2022 Holidays
vivo’s coming to town to grant wishes with more holiday promos
MOST READ
LOOK: Vhong Navarro transferred to BJMP detention facility in Taguig
The Elephant Man in the Senate
Posh village as ‘shabu’ haven
LOOK: Zanjoe Marudo bonds with Ria Atayde, her family
Don't miss out on the latest news and information.