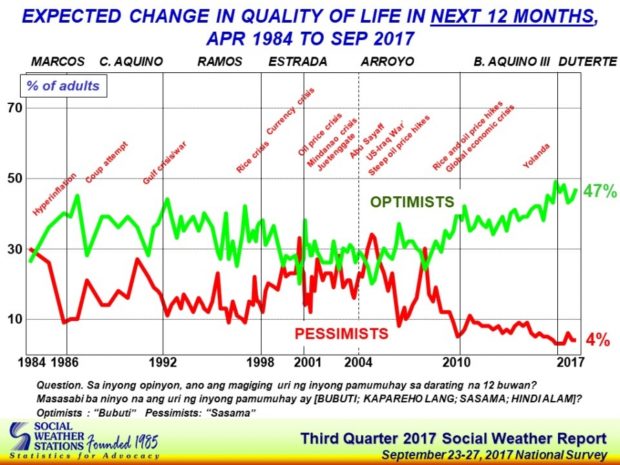 More Filipino adults now feel positive that their quality of life would improve within the next 12 months, the latest survey of the Social Weather Stations (SWS) showed.

The SWS survey was conducted from September 23-27, 2017 using face-to-face interviews of 1,500 adults nationwide. The sample includes 600 in Balance Luzon, and 300 each in Metro Manila, Visayas, and Mindanao.

It has a sampling error margin of plus-minus 2.5 percent for national percentages, plus-minus 4 percent for Balance Luzon, and plus-minus 6 percent each for Metro Manila, Visayas, and Mindanao.

The survey results yielded a net personal optimism score of 42 percent. This is 2 percent above the excellent rate of 40 percent – 44 percent optimists less 4 percent pessimists – in June 2017.

The September 2017 survey also found that 43 percent are optimistic that the general Philippine economy in 2018 would get better, while 12 percent are pessimistic that it would “deteriorate.”

For a net optimism about the economy score of 30 percent, the rate is classified as “excellent.” This result is 3 points above the excellent score of 27 percent – or 39 percent optimistic less 12 percent pessimistic – in June 2017.

The net personal optimism in both categories had been in excellent since December 2015, except in March 2017 when it was “very high” at 36 percent.

The net gainers had been very high in all five surveys since September 2016.     /kga