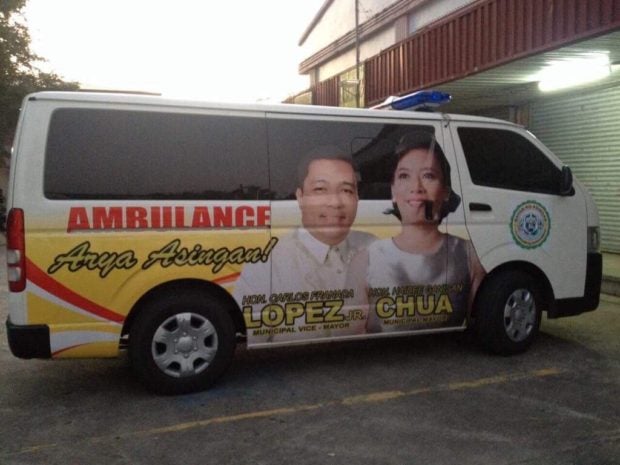 LINGAYEN, PANGASINAN—For imprinting their faces and names on the side of the town ambulance, the mayor and vice mayor of Asingan town in Pangasinan province were suspended for one year without pay by the Office of the Ombudsman.

Mayor Heidee Chua and Vice Mayor Carlos Lopez Jr. were penalized for “conduct prejudicial to the best interest of the service, simple misconduct and violation of the Code of Conduct and Ethical Standards for Public Officials and Employees,” according to a decision signed on Oct. 13 by Ombudsman Conchita Carpio Morales.

Chua and Lopez could not be immediately reached for comment. The decision reached them on Thursday by official mail.

The case stemmed from a complaint filed by Asingan Councilor Evangeline Dorao, who said the mayor and vice mayor violated a 2010 circular prohibiting the placement of the names or initials and pictures of government officials on billboards and signs detailing government programs, projects and properties.

Dorao said she had reminded Chua and Lopez of a memorandum circular of the Department of the Interior and Local Government in two letters she sent in October last year. The councilor said she did not receive any reply.

In their joint counter-affidavit, Chua and Lopez said they immediately removed their pictures and names from the ambulance on the first week of November. —GABRIEL CARDINOZA

TAGS: Asingan town in Pangasinan, imprinting their faces and names, photos on ambulance