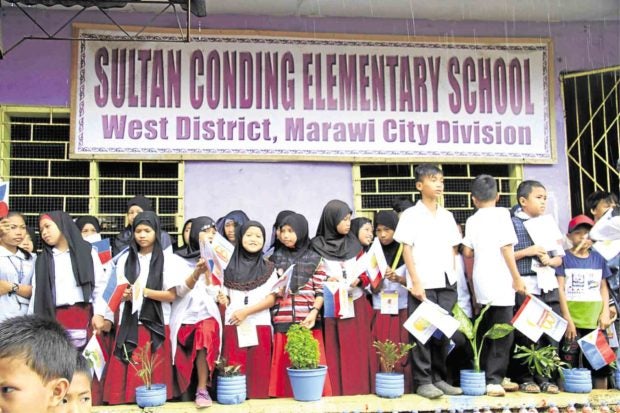 Students in Marawi City welcome officials of the Department of Education during the launch of a three-day Brigada Eskwela on Wednesday. —RICHEL V. UMEL

MARAWI CITY—The familiar sound of a school bell was heard in this war-torn city in Lanao del Sur province on Wednesday to signal a government-led drive to clean, repair and improve school buildings damaged by the five-month fighting between government troops and Islamic State-inspired terrorists.

“Education can’t wait … [We] must continue to serve school children,” said Education Secretary Leonor Briones as she rang the new bell, donated by the European Union, at Amai Pakpak Elementary School here to signal the start of Brigada Eskwela. The campaign involves 15 schools that started holding classes here after the military declared the end of the conflict in late October.

Markus Schindler, EU representative, said the new school bell replaced the vintage bomb casing that the school was using, noting that the old bell seemed to represent Marawi’s past.

Briones said Brigada Eskwela volunteers did minor repairs and improvement of 15 schools outside the former main battle zone where soldiers engaged members of the Maute and Abu Sayyaf groups who laid siege to Marawi on May 23.

She said repair works would run until Friday, but she said she wanted to inspect schools in the main battle zone, located in Marawi’s business district.

“I want to visit the 22 school buildings [destroyed] by the recent war … so I could present and recommend [plans] to donors who want to help in rebuilding and rehabilitating Marawi City,” Briones said.

Of the 69 public schools in Marawi, 47 are outside the main battle zone and are considered “safe,” said Ronilda Co, chief of the Disaster Risk Reduction Management Service of the Department of Education (DepEd) central office. Some schools have resumed classes, DepEd officials said.

Assistant Education Secretary Alfadar Pajiji of the Autonomous Region in Muslim Mindanao, in a briefing in Iligan City on Tuesday, said P1.2 billion had been earmarked for building new structures to replace 22 school buildings destroyed by the war.

DepEd said 22,713 school children had been displaced by the fighting in Marawi.

In Iligan City, DepEd also announced the release of P17.75 million to public schools in Lanao del Norte province and the cities of Iligan and Cagayan de Oro, which accommodated students displaced by the fighting in Marawi.

The amount will augment donations and will be used to buy learners’ kits, armchairs, teachers’ kits and instructional materials, cleaning kits, water jugs and blackboards. —RICHEL UMEL AND DIVINA SUSON