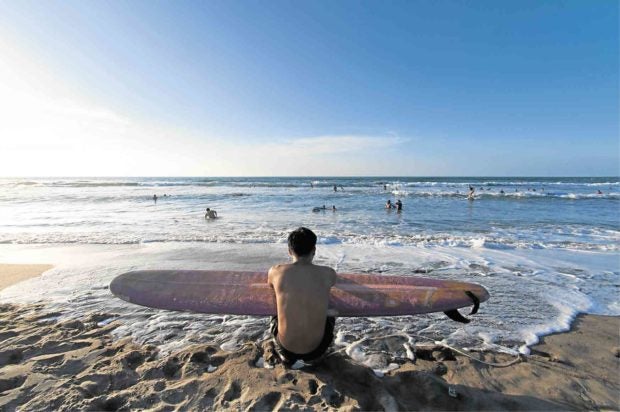 A surfer scans the waters of San Juan town in La Union province, waiting for the perfect wave. RICHARD BALONGLONG

LINGAYEN, PANGASINAN—Travel time from Metro Manila to the beach resorts in San Juan town in La Union province will be about one hour and 30 minutes shorter, with the proposed extension from Rosario town to San Juan of the Tarlac-Pangasinan-La Union Expressway (TPLEx).

He said the company had surveyed the area and had found the extension was technically viable.

“It’s an inter-regional big ticket project that will be approved at the national level. It’s going to happen but let’s wait for the details,” Rillon said in a news briefing after a regional development council meeting here last week.

Extending TPLEx to La Union means more visitors to the north and “it will be good for us,” he said.

According to the Department of Public Works and Highways, the last TPLEx section, which is a 10.92-km stretch from this town to Rosario, is set for completion in June 2019.

Towns and cities in Tarlac, Pangasinan and La Union traversed by TPLEx have benefited from additional revenues and jobs and easier access to their tourism sites, Dumol said.

He said the number of pilgrims visiting the Shrine of the Holy Face in Nampicuan town in Nueva Ecija province had increased five times because the shrine could be accessed through Anao exit in Tarlac in just 10 minutes.

The number of tourists going to Minor Basilica of Our Lady of the Rosary of Manaoag in Manaoag town in Pangasinan has tripled, “and most of these tourists spend money for hotel and food,” he said. —GABRIEL CARDINOZA