Former President Benigno S. Aquino III appeared before the Senate investigation on the government’s anti-dengue immunization program, which commenced during his term.

During Monday’s joint hearing of the Senate blue ribbon, health, and finance committees on the issue, Senator Richard Gordon hinted that Aquino had a hand in the failure of the program, which uses Dengvaxia, an anti-dengue vaccine manufactured by French pharmaceutical company Sanofi Pasteur.

Gordon is the chairman of the Senate blue ribbon committee.

Earlier, Gordon said he invited Aquino to shed light on his alleged 2015 meetings with officials of Sanofi Pasteur.

According to Gordon, he sees “strong signs of a conspiracy to buy” the vaccine, starting from the negotiations up to its purchase through the immediate release of P3.5 billion fund for the vaccination program.

Sanofi also denied any negligence on the part of their company. 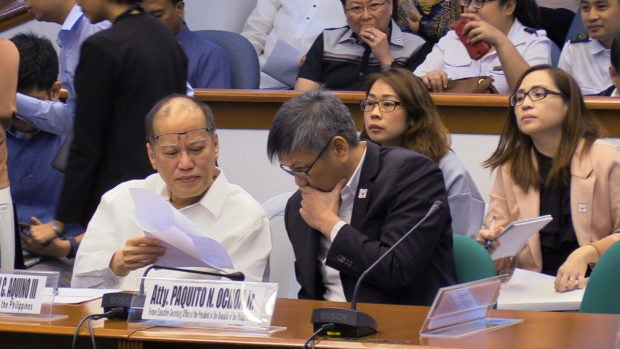 Last week, the Department of Health (DOH) stopped the administration of Dengvaxia vaccine and ordered the close observation of those who had received it. This developed after Sanofi earlier issued an advisory, which said that its vaccine “could lead to more severe symptoms for people who had not previously been infected” by dengue virus.

Around 12,000 uniformed personnel, including their families and children, were also vaccinated, Duque said.   /kga