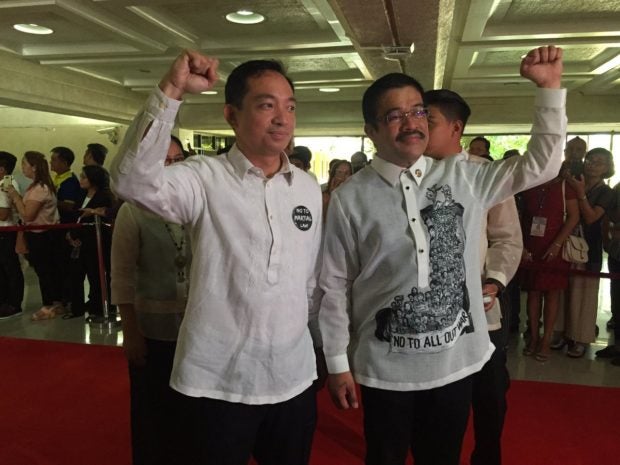 Citing the lack of a quorum, militant lawmakers slammed the “invalid” ratification of the comprehensive tax reform package at the House of Representatives.

ACT Teachers Rep. Antonio Tinio said the bicameral version of the tax bill was ratified with only about 10 House representatives present.

“Tonight’s ratification of the TRAIN by the House of Representatives was a total farce and travesty of so-called representative democracy,” Tinio said in a statement Wednesday.

“With barely 10 people on the floor and despite my very clear objections due to obvious lack of quorum, the presiding officer and majority floor leader proceeded to adopt the final report of the tax reform bill’s bicameral conference committee, copies of which were not even on hand,” Tinio said.

Tinio pointed out that “since there was no quorum and no actual vote was taken, the alleged ratification (was) clearly invalid.”

While the Tax Reform for Acceleration and Inclusion (TRAIN) bill was being tackled at the House, Tinio said most lawmakers who were supposed to comprise a quorum partied with President Duterte in a five-star hotel in Manila.

Sought for comment, House majority floor leader Rodolfo Fariñas Sr. said he was not able to make it to the session due to an emergency.

Fariñas said he was also not present at the party with Duterte and Partido Demokratiko Pilipino–Lakas ng Bayan (PDP-Laban) members.

But Fariñas said that if any House member wanted to contest the ratification, he or she could report it to the plenary or the courts.

“If any member is contesting the report of the presiding officer and the floor leaders about the proceedings leading to the ratification of the BiCam Committee Report on the TRAIN, such member could bring it to the attention of Plenary or, if not contented, to the courts,” Fariñas said in a text message to reporters.