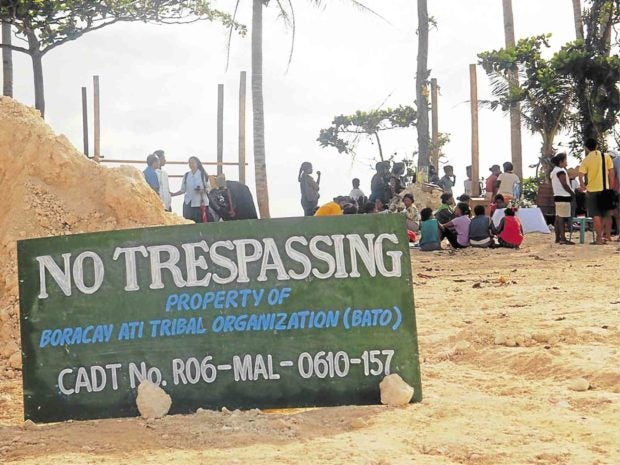 In 2012, the Ati tribe put up a signboard asserting their possession of ancestral land on Boracay Island in Malay town, Aklan province. —NESTOR P. BURGOS JR.

ILOILO CITY—The Ati tribe of Boracay Island sought the government’s help as a claimant of a section of their ancestral land had threatened to drive them away.

“We are afraid that we will be driven away from our homes,” Evangeline Tamboon, a member of the Boracay Ati Tribal Organization (Bato) council of leaders, said in a telephone interview.

She said part of the perimeter fence of the community where members of the Ati tribe live had been torn down by workers of one of the claimants of the disputed 2.1-hectare property in Barangay Manoc-Manoc.

The Ati village is located on a beachfront property awarded to the tribe, through Bato, in 2011 through a Certificate of Ancestral Domain Title (CADT) issued by the National Commission on Indigenous Peoples (NCIP).

Several claimants, however, have questioned the CADT.

A claimant, Gregorio Sanson, said he owned a 25,310-square meter area that included parts of the CADT after it was sold to him by Marenciana Gelito on Sept. 25, 1973.

“The government already gave us a title for the land but we are not yet secure,” Tamboon said.

Workers, who were reportedly employed by Sanson, presented to the Ati tribe a decision of the Court of Appeals (CA) that declared as null and void the orders of the NCIP upholding the rights of the tribe to occupy the property.

In the 13-page decision, the CA’s Seventh Division ruled that the NCIP had no jurisdiction over the property dispute between the tribe and private claimants.

It cited a 2015 Supreme Court ruling which declared that “the NCIP shall have jurisdiction only when the disputes arise between or among parties who are members of the same [indigenous cultural community/indigenous peoples].”

In ruling that the NCIP had no jurisdiction over the Boracay Ati case, the CA also declared as null and void rulings of the NCIP that, among others, directed the installation of the tribe on the property and an order barring land claimants from constructing structures in the contested area.

In a resolution promulgated on May 18, the CA’s Former Seventh Division denied a motion for reconsideration filed by the NCIP.

Lawyer Princess May Alcarde-Oral of the legal affairs office of the NCIP Western and Central Visayas, said the agency would file criminal complaints against the workers who tore down the fences and entered the Ati community.

Oral said the CA ruling dealt with the jurisdiction of the NCIP over the dispute and not on the ownership of the property.

Land claimants cannot also occupy or claim possession of any part of the property granted to the Ati without a court order, she said.