The new OFW card, referred to as “the ‘best gift’ of President Rodrigo Roa Duterte to millions of overseas Filipino workers” by the Department of Labor and Employment (DOLE), has been widely anticipated. Upon its initial release, netizens have aired both their admiration and criticisms of it.

Feedback ranges from praise of its usefulness to calling out DOLE for its use of President Duterte’s image on the card.

On Sunday, a post by Presidential Communications Assistant Secretary Mocha Uson on her Facebook blog featured her and labor secretary Silvestre Bello III holding the government-issued ID that bears a photo of President Rodrigo Duterte.

In a statement released on DOLE’s official site, Bello said that the IDs are still in the stage of initial implementation. The department said that it is currently for limited release, to test and secure its features.

“This is only the first phase of implementation and will cater first to our Balik-Manggagawa until the system is ready for all OFWs,” Bello said in the statement, referring to returning/vacationing OFWs.

OFWs can avail of the card by creating an account on the iDOLE site, and they must input their Overseas Employment Certificate number as a requirement. The service is free of charge.

The ID ensures that OFWs will experience hassle-free services when it comes to processing their overseas employment or other government transactions. With the card, they can avoid long lines and transact online.

Uson’s post quickly went viral and netizens had mixed reactions regarding the inclusion of Duterte’s face in the government-issued ID.

Some cheered for the inclusion of the President’s photo on the card, since the card is a project of his administration.

One netizen expressed the sentiments of others, as he wished to also have his own iDOLE card.

Meanwhile, some netizens were quick to point out that the placement of the President’s photo on the card is an “epal” (shameless self-promotion) move, and is something that the President surely would not approve of. As stated by one commenter, the President does not even like his poster hoisted up in government offices. 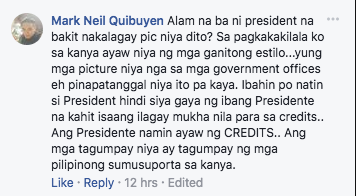 Other netizens have other concerns beyond the President’s photo. They complained that they cannot access the site to sign up for the card.

As of this writing, to answer the queries of those who want to have their own iDOLE card — regardless of it bearing the face of the President — Uson has posted in her blog that the department website is being updated. JB