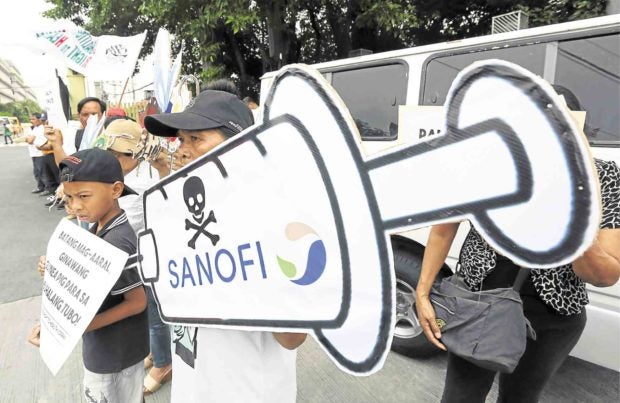 ANTI-DENGVAXIA Health workers claim during a rally outside the Senate on Monday that children inoculated with the dengue vaccine Dengvaxia were used as guinea pigs under the government’s P3.5-billion immunization program that has been eventually halted due to safety concerns. —MARIANNE BERMUDEZ

A former consultant to the Department of Health (DOH) told the Senate on Monday that a “widespread cover-up” was going on in the agency involving the acquisition of the Dengvaxia vaccine for an immunization program that had been halted due to safety concerns.

Garin implemented the P3.5-billion immunization program toward the end of the Aquino administration in 2016.

The DOH halted the program on Dec. 1, two days after the maker of Dengvaxia, the French pharmaceutical giant Sanofi Pasteur, announced that the vaccine could worsen dengue symptoms in vaccinated people who had not been previously infected by the mosquito-borne virus.

The Senate blue ribbon committee opened an inquiry into the fiasco on Monday, with Garin attending and denying any wrongdoing and corruption in the immunization program.

She left early because she was scheduled to have an appendectomy.

Duque told the hearing that 830,000 children aged 9 and over received the vaccine in schools and another 2,300 received it in private hospitals.

Several health experts told the hearing that the immunization program was done “prematurely.”

Sanofi Pasteur officials who were called to the hearing, however, stood by the safety and efficacy of Dengvaxia.

In his testimony, Cruz said he studied the records given to him by Ubial when he became a consultant in January and found many “red flags” in the transaction and procurement of Dengvaxia for the immunization program.

“I told Secretary Ubial that [the red flags] were scary and it was possible that there would be a big cover-up because of the involvement of some DOH personnel,” he said, adding that the transaction involved such a big amount but DOH officials were “quiet” and “no one was telling the truth, they were all covering it up.”

Cruz said he told Ubial that the Department of Justice should investigate the red flags because the DOH was “unable to help itself.”

He said he went to the Volunteers Against Crime and Corruption in May to seek help.

Among the flaws in the procurement, he said, was that it did not go through the DOH undersecretary for technical services, Dr. Vicente Belisario.

Cruz also said the government should not have accepted the vaccine because one batch of the supplies was expiring in one year and four months.

“If you are given a vaccine with an expiration date of or a technical shelf life of less than three years, you will be suspicious, even more if it’s one year and four months. Why will you accept it considering the big amount here?” Cruz said.

Ubial, who attended the hearing, said that according to the law, the vaccine should have a shelf life of 18 months.

Cruz also questioned the basis for choosing schoolchildren for immunization and the decision to carry out the program during summer vacation and in an election year. 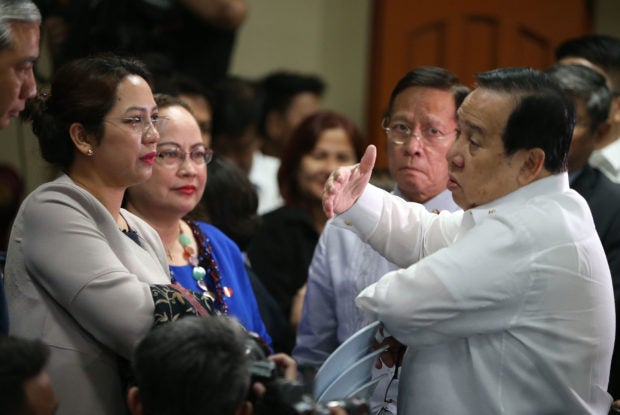 “There is no urgency to have that vaccination,” Cruz said, adding that mass immunization should have been accompanied by a “vector control intervention.”

Cruz said Ubial was “harassed” into implementing the program, but did not say who were involved.

The congressional Commission on Appointments rejected Ubial’s nomination on Oct. 10.

Cruz asked Congress to widen its investigation of the controversy, which he said was just “the tip of the iceberg.”

Ubial confirmed that she was pressured to implement the immunization program from her first day in office.

She said she objected to the program and among her reasons was that a new vaccine should be tried on 20,000 to 40,000 people over a trial period of 20 years.

“Why would you give it suddenly to 1 million children in just one year?” Ubial said.

She said it was also an “unwritten law” in the DOH not to introduce new vaccines during an election year “because no matter how good the vaccine is … it will [be tainted] as a hidden agenda of somebody.”

Ubial said it was “difficult” for her to implement the program but she had no other choice and that she had to do damage control because people in Congress had told her that if she stopped the program she could go to jail for not honoring the contract.

She said she had no choice but to implement the program after the World Health Organization announced in July 2016 that the vaccine was safe and efficacious and after it was licensed by the Food and Drug Administration.

Ubial asked Congress to look into the process by which the government introduced vaccines, adding that there should be no political interference.

“If you mix politics and health, it’s really a disaster,” she said.

Ubial said she asked a panel to review the immunization program. She said the panel returned on Sept. 7 with the finding that there was nothing illegal about getting the vaccine exempted from the national formulary but there was something “unethical” about it.