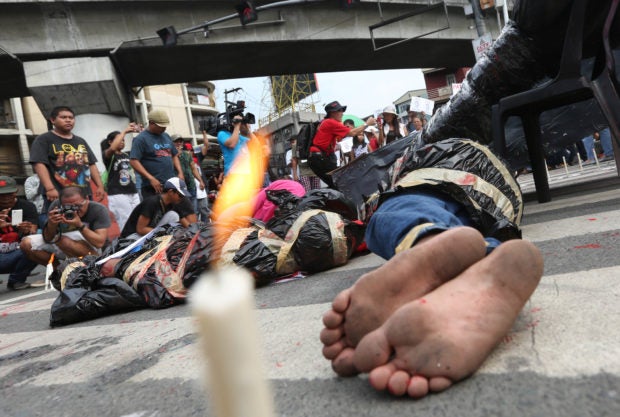 MENDIOLA PROTEST Activists stage a mock killing to protest “Operation Tokhang,” the Philippine National Police crackdown on illegal drugs, and dramatize their call for an end to extrajudicial killings during a rally at Mendiola in Manila on Sunday, International Human Rights Day. —MARIANNE BERMUDEZ

An organization of incumbent and former lawmakers from Southeast Asia working for the protection and promotion of human rights on Sunday described 2017 as a “challenging year for human rights advocates” in the region, citing gross and blatant violations committed by some members of the Association of Southeast Asian Nations (Asean), including the Philippines.

The Asean Parliamentarians for Human Rights (APHR) released its statement in time for International Human Rights Day, celebrated throughout the world on Sunday.

“In country after country, we have witnessed backsliding on democracy and human rights commitments and seen vulnerable communities increasingly put at risk. Among the most concerning developments have been an all-out assault on democracy and civic space in Cambodia, the perpetuation of a bloody war on the poor in the Philippines, and unspeakable atrocities committed against the Rohingya in Myanmar,” the APHR said.

“Meanwhile, the trend of shrinking democratic space in the Asean region has only grown starker,” the group said in the statement signed by Malaysian member of parliament Charles Santiago as APHR chair.

The Philippines’ Rep. Teddy Baguilat of Ifugao and former Rep. Walden Bello of Akbayan are members of the APHR board.

The APHR wants the Asean to “clarify” where it stands on the protection of human rights, despite the regional bloc’s commitment as expressed in its charter to “uphold human rights and promote democratic space.”

It called out Asean, saying the bloc “stood by silently as human rights are violated, protections eroded and democratic norms and processes trampled.

If Asean truly wants to embrace its people-centered mantra, it must work to shift course and deal with pressing human rights challenges, the APHR said.

It said leaders “at the national, regional and global levels are abdicating their responsibilities and failing to defend the rights and dignity of their people.”

‘All is not dark’

“In this deeply concerning regional and global context, it is critical that human rights defenders of all types, from grassroots activists to parliamentarians, join together to safeguard the rights of all,” the group said.

“We, as parliamentarians, stand in solidarity with civil society as they bravely continue their important work, despite setbacks and threats. All is not dark, but there is more to be done,” the APHR added.

It gave tribute to the nongovernment organizations, community groups, trade unions, peoples’ movements, and other groups that continued to work together “in difficult times, operating within the limited space they are permitted, to ensure that the human rights cause is carried forward and that tomorrow can be a brighter day for the Asean region.”

“We are committed to working with them toward this goal,” the APHR said.