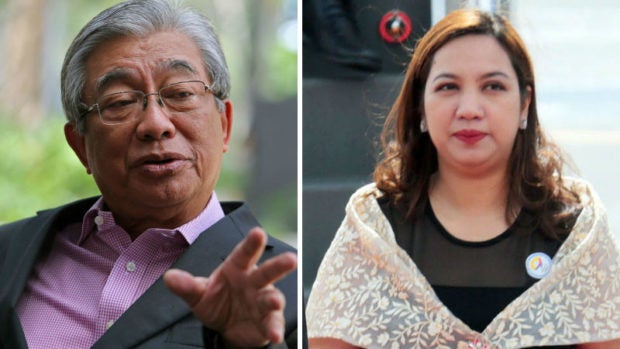 Former Health Secretary Enrique Ona on Sunday said that his successor at the Department of Health (DOH) was “solely responsible” for the dengue immunization program using Sanofi Pasteur’s Dengvaxia vaccine.

“In the light of the Sanofi Pasteur advisory on the use of the antidengue vaccine Dengvaxia, the leadership that took over the DOH after I left in Dec. 20, 2014, is solely responsible for all the decisions that has resulted in what is becoming to be a major health nightmare in the country today,” Ona said in a statement.

His successor, former Health Secretary Janette Garin, on Friday traced the Dengvaxia mess to the time of Ona at the DOH.

“Talks about the vaccine started during the time of Secretary Ona. In 2014, I think June or July, he already announced that we would be having the vaccine by 2015. He said the department was contemplating putting it [on] the public health program,” Garin said in an interview with ANC.

But on Dec. 1, the DOH halted the P3.5-billion program after Sanofi announced that Dengvaxia could worsen symptoms in vaccinated people who had not been previously infected.

More than 700,000 schoolchildren have received at least one dose of the vaccine, according to the DOH.

Last week, the Food and Drug Administration suspended Sanofi’s license to sell Dengvaxia in the Philippines until the company could comply with local regulations.

The good government committee of the House of Representatives and the blue ribbon and health committees of the Senate open separate inquiries into the fiasco this week.

“During this period, the Sanofi Pasteur Pharma group would request a briefing for me on the status of the clinical trial of their antidengue vaccine being tested (phase 3 trial) in Southeast Asia, including the Philippines, as well as several countries in South America. This occurred almost annually during my term as secretary,” Ona said.

It was of great interest to him, he said, since dengue fever was not only rampant in the Philippines, appearing almost all year round, and was also being used as one of the “measures of our public health performance” by the public.

“I had high hopes, like many others, that the vaccine being developed would eventually control this mosquito-borne disease that afflicts more than 100,000 Filipinos annually and scares so many foreign visitors and tourists,” Ona said.

Unfortunately, he added, during all this time and up to the end of his term, the Sanofi staff, though optimistic, never claimed that the vaccine was ready for general use.

Ona said Sanofi gave him only a vague projection of the time when it might be ready for launching.

“I recall in more than one occasion that I mentioned in passing to then President (Benigno) Aquino of a possible dengue vaccine that may be ready ‘anytime soon,’” he said.

“However, we did not allocate any budget for dengue vaccine for 2016 since I considered this vaccine as still at its ‘developmental stage’ and was undergoing further observation and evaluation,” he said.

Ona said he was already out of the government in 2016 when he first heard that the DOH was going to purchase Dengvaxia for immunization of children over 9 years old.

“And allocating several billion pesos, an amount more than the entire budget for all other vaccines being procured by the DOH annually,” he added.

“It may be relevant … to cite an article at one of the world’s most respected and credible journals, the New England Journal of Medicine, Sept. 24, 2015, issue, which concluded: the efficacy profile at 25 months of disease surveillance was complex—efficacy caused by serotype 2 ranged from 67-80 percent and lower still for those who were seronegative at baseline,” Ona said.

He said the report came with an accompanying editorial titled “A Candidate Dengue Vaccine Walks a Tightrope” by Cameron P. Simmons.

“If read by any expert in infectious diseases or public health, it would have made one wait for more follow-up studies to further evaluate the safety and efficacy, sans cost. In short, ‘value for money,’ so essential in today’s health environment,” he added.

Garin was unavailable for comment on Sunday. A spokesperson for Garin said the former health secretary was confined in a private hospital in Tacloban City with acute appendicitis.

Nancy Almasco, the spokesperson, said Garin would ask her doctors to delay her operation so she could attend the opening hearing on the Dengvaxia controversy at the House of Representatives.

The House committee on good government will hold Sanofi liable for allegedly misrepresenting Dengvaxia’s side effects because the French pharmaceutical giant disclosed the risks only in late November, months after the congressional inquiry into the vaccine’s safety, Rep. Johnny Pimentel, the panel’s chair, said on Sunday.

“During our hearing, they never disclosed this,” Pimentel said in an interview on dzBB radio.

“We will hold Sanofi accountable for this erroneous representation because during the hearing, they said it was safe. But now, it’s another thing,” he said.

Pimentel recalled that Sanofi representatives, during the hearings that lasted from Nov. 29, 2016, to July 26 this year, testified about the safety of Dengvaxia.

At the time, Sanofi Pasteur’s regional dengue expert Anh Wartel played down the risks, saying “the concerns expressed in the background are based upon ‘what-if’ conjectures.”

It was only on Nov. 29 that Sanofi announced that the vaccine could heighten the risk of illness for people who had not been exposed to dengue prior to immunization.

Pimentel raised the possibility that Sanofi representatives “deliberately” misled the congressional inquiry, or that they were “misinformed.”

He said it was a “blessing in disguise” that the good government and health committees had not produced a committee report yet, especially since the draft stated that “Dengvaxia is safe to use.”

“If we had rendered the committee report, we could have absolved Sanofi of responsibility, because they testified that it was safe to use,” he said.

In a separate statement, Pimentel said the committees’ initial review pointed to “unwarranted haste” in getting Dengvaxia approved for use on Filipino children and adopting an aggressive inoculation program using the world’s first licensed dengue vaccine.

“Many of us [on] the committee were in fact dumbfounded by the excessive rush to allow the use of the vaccine and to get the program going,” he said.

“Questions were raised as to why we had to be the first country in the world to launch in April 2016 a public inoculation plan against dengue, when the [Department of Health] could have simply waited for the results of further studies [on] the safety and efficacy of Dengvaxia,” he added.

The House inquiry reopens on Wednesday afternoon. Pimentel said he did not know if Garin would be able to appear at the hearing if she would be operated on for appendicitis.

Meanwhile, the DOH reminded the public that they should not shun other vaccines under the government’s Expanded Program on Immunization.

“Other vaccines are clearly beneficial. [We] continue to recommend them,” Health Undersecretary Herminigildo Valle said. —WITH A REPORT FROM JOEY A. GABIETA