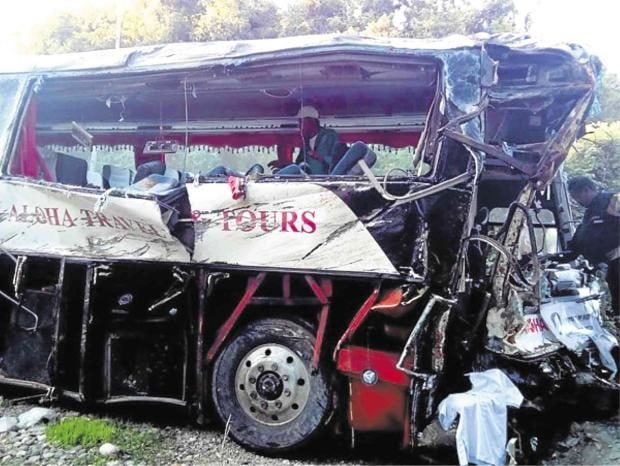 The wreck of the Charm tourist bus in the town of Magsaysay, Occidental Mindoro province. (Photo from Mimaropa Police Regional Office)

SAN PEDRO CITY—A bus carrying mostly students and school officials headed for an athletic meet crashed in a town in Occidental Mindoro on Saturday night, killing at least two and injuring 26 others.

The fatalities were identified as Elmer Decillo and Jonathan Penada, both officials of the University of Rizal System (URS), a public school in Rizal province. Decillo was sports director while Penada was director of the URS campus in Binangonan town, Rizal.

At least 26 students of URS were injured.

The injured were taken to at least three hospitals in Occidental Mindoro.

Strasuc is an association of public colleges and universities in the regions of Calabarzon (Cavite, Laguna, Batangas, Rizal, Quezon) and in Mimaropa (Mindoro, Marinduque, Romblon, Palawan.)

Senior Supt. Romie Estepa, Occidental Mindoro police director, said the crash took place at 6:30 p.m. on Saturday on a highway in the village of Nicolas in Magsaysay town.

Estepa, in a phone interview, said the victims were on board a bus operated by Charm Travel and Tour Bus Co., which was tailing a coaster with at least 19 more URS students and coaches.

“They were at this very steep part of the road when the bus (driver) reportedly lost control of the brake,” Estepa said.

Based on passengers’ accounts, police said the bus driver tried to avoid hitting the coaster in front of the bus, causing the bus to plunge into a 10-foot deep roadside canal.

None of the passengers in the coaster was hurt.

Police said it took some time to pull the bus out of the canal, describing the road as dark and steep.

Estepa said the group was a town away from its destination.

He said most of the injured had been discharged from hospitals on Sunday except for two, who had to be brought to Batangas province for more adequate treatment of fractures and deep cuts from glass shards.

Police are still determining what legal action can be taken against the bus operator.

But the Land Transportation Franchising and Regulatory Board (LTFRB) said it was likely to suspend the operations of the bus operator, Charm, following the tragedy.

An LTFRB spokesperson said the bus was out of line as Charm was licensed to operate only in Central Luzon. The injured passengers, however, were still covered by insurance, the LTFRB said.

The mishap won’t suspend the athletic meet, though, according to Dr. Tirso Ronquillo, president of Batangas State University and this year’s Strasuc chair.

URS students and coaches not involved in the crash proceeded to San Jose for the athletic meet.

URS has yet to issue an official statement but a faculty member said the school was preparing to mourn school officials who died in the accident.

URS has 10 campuses in the towns of Morong, Binangonan, Tanay and Cardona in Rizal. —With a report from Jerome Aning