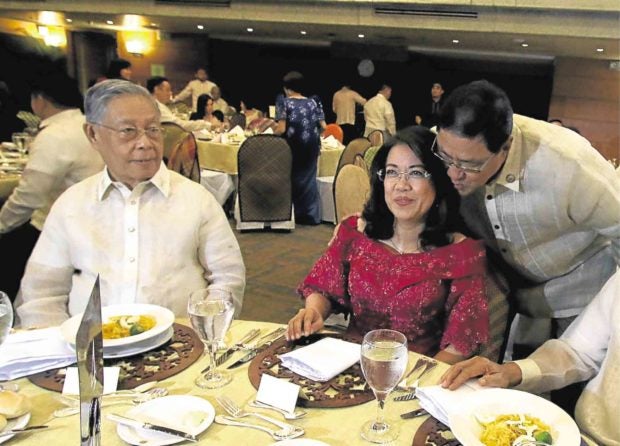 It was civil but cold.

Chief Justice Maria Lourdes Sereno, who is facing impeachment in the House of Representatives, was polite while Oriental Mindoro Rep. Reynaldo Umali, who chairs the House committee reviewing the charges against her, appeared solicitous.

That was when the top magistrate and the congressman ran into each other on Friday night at the 30th anniversary party of the Judicial and Bar Council (JBC), the first time they had met since the impeachment hearings started last month.

“Hi!” a smiling Umali greeted Sereno loudly as she walked into the hall in his direction. Also wearing a smile, Sereno merely glanced at Umali as she walked past him without saying a word.

Umali then gave Sereno a buss on the cheeks after she took her seat with former Chief Justices Hilario Davide Jr. and Artemio Panganiban. Sereno did not look at Umali or respond in kind and just kept smiling for the cameras.

Umali warmly greeted the others on the same table with Sereno but the two did not exchange words, until the end of the night’s program.

Sereno, however, included Umali among those whose presence she acknowledged at the start of her speech, which dealt with the role of the JBC in vetting and nominating to the president candidates for vacant posts in the judiciary.

As ex-officio head of the JBC, her alleged manipulation of the Council to exclude Associate Justice Francis Jardeleza from the shortlist of possible new appointees to the high tribunal was one of the impeachment charges she has denied.

In her speech, Sereno said she took pride that in the past five years with her as chair, the JBC rigorously screened candidates for top posts in the judiciary at the expense of personal friendships.

“We must remain unfettered by the shackles of friendship and I know I have lost friends in the process of casting my vote. And so have my other brave comembers of the Council,” she said.

“We hold the future of our nation and therefore it is critical that we properly choose who we will include in the shortlist, someone who is without a shadow of a doubt loyal to the law and will be independent,” she stressed.

She expressed her disappointment that President Duterte was not present to hear her speech. The President was at another event and sent Executive Secretary Salvador Medialdea to represent him.

“I would have delivered this address with President Duterte in attendance, but I guess Medialdea is just as welcome,” Sereno said.

Among the personalities who have testified on the impeachment complaint filed by lawyer Lorenzo Gadon in the hearings called by Umali’s committee were Associate Justice Teresita Leonardo-De Castro and Court Administrator Midas Marquez. Jardeleza and Associate Justice Noel Tijam also have been called to back Gadon’s complaint.

The other ex-officio members of the JBC are Justice Secretary Vitaliano Aguirre II and Sen. Richard Gordon and Umali, chair of the Senate and House committee on justice, respectively.